ROBERT NWADIARU, a former Religious Brother has passion for what happens in human society. He has written many articles in a variety of publications. He is a member of Tate Speakers Bureau. He was a parish catechist, a high school teacher and a university teacher. He still functions as a pastoral assistant in his parish in New York City, though, on voluntary basis. Perhaps his religious background has enabled him to see the situation clearer. 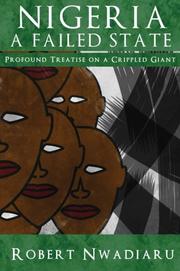 Political repression, rampant corruption, ethnic and sectarian strife, crumbling infrastructure, energy shortages, and an economy hooked on oil and mining all make Africa’s most populous country a basket case, according to this hard-hitting jeremiad.

Debut author Nwadiaru ranges through Nigeria’s history since it gained independence in 1960, finding in it a story of vast potential and natural resources that have been squandered by misrule. He gives rundowns of the many coups and military regimes that have disfigured the country, but he finds periods of elected civilian rule scarcely better; he describes President Olusegun Obasanjo, elected in 1999 after 15 years of military rule, as “the most brutal and arrogant leader Nigeria has ever had” and notes that his successor ruled Nigeria for three months from a Saudi hospital. Nwadiaru exposes the toxic political culture that underpinned these dysfunctional regimes, which included pervasive violence against opposition politicians, journalists, labor unions, human rights groups, and indigenous organizations; omnipresent corruption involving everyone from local officials to first ladies; cunning politicos who manipulated and subverted even well-intentioned leaders; and an ambient “moral laxity” he sees in Nigerian society that seems resigned to gross ethical compromises. From politics the rot has spread, he contends, giving the country bad roads, inadequate schools and health care, a skimpy and unreliable electricity supply, a steep decline in farm productivity, a dependence on royalties from an oil industry that has bred insurgency in oil-rich areas; and a moribund economy that makes talented Nigerians flee the country. Although the book could use a stronger copy edit, Nwadiaru’s prose is for the most part lucid, well-organized, and stuffed with telling details. (Occasionally, though, it bogs down in too much detail, as in a 20-page reprint of anti-corruption statutes.) The author’s anguish at the conditions in his country is palpable, but he still delivers clear analysis and measured judgments on problems and needed reforms. Americans who know Nigeria mainly for its Islamic Boko Haram terrorists and internet scams will find this book an informative guide to the country’s larger discontents.

An impassioned, eye-opening take on a critical African nation.