Robert Santoro was raised in Malden and Medford Massachusetts. He is the youngest and last survivor of eight children born to Italian Immigrants.
Robert currently resides in the fall and winter in The Villages, Florida and in the spring and summer in Lynnfield, Massachusetts.

A Story of Courage and Inspiration

Based on the story of a young boy from Avellino, Italy who is forced to take a journey which separated him from his home, mother and father forever. He was alone and found himself exposed to perilous situations from one side of the Atlantic to the other. This is a story of his courage, strength and endurance and his final struggle to be free to live his life as an adult in the new world.

• He was kidnapped by the Italian Militia at age nine.
• Dragged into a military battle in a foreign land.
• Escaped and become an illegal immigrant in the USA.
• Hunted by the New York Mafia.
• Both legs amputated and still managed to survive. 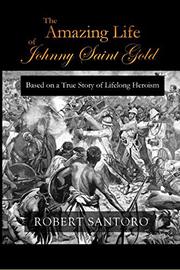 In this debut historical novel, Santoro recounts the sensational life of his father, an Italian immigrant at the turn of the 20th century.

Soldiers take 9-year-old Johnny Santoro from his parents’ farm in Avellino in southern Italy and press him into service with the Italian militia. His last name earns him the nickname “Johnny Saint Gold,” and his skill with horses ensures that he’s kept in service as the unit traverses Italy and sails to Ethiopia. During the Battle of Adwa, he’s forced to flee and joins a small group of deserters. He later escapes to America with a man named Angelo. A kind Italian couple in New York City adopts him, and he faces the prospect of starting a new life there, although he hopes to one day reunite with his parents and siblings. This novelistic account of the real-life Johnny’s exploits is written by his youngest son. It offers tense, joyous, and heartbreaking moments, by turns, as Johnny learns how to box, encounters the Italian Mafia, meets his future wife, starts a new business, deals with the deaths of friends and family, and struggles with the effects of diabetes. The author’s prose is simple, straightforward, and occasionally repetitive, but his material is often moving, and his love and respect for his father is clear throughout. At one point, for instance, he offers this praise: “His greatest achievements were to survive his experiences and continue to live life and face the future with a positive attitude. He set an example for all that knew him to be strong and positive.” Santoro seldom comments on the historical significance or political context of the events he describes. Instead, he faithfully preserves the anecdotes that his father passed down to him. He breathes life into the story through small details, such as the name of his grandfather’s childhood horse or the way that Johnny’s foster mother made sandwiches. Along the way, Santoro offers an intimate look at the lives of immigrant families of the era. (Includes occasional, uncredited black-and-white and color photos.)

A heartfelt, if simply written, tribute to a man who encountered considerable adversity.