Robert Traynham Coles is a native of Buffalo, New York, who was born on August 24, 1929. Robert was one of four sons born to George Edward and Helena Vesta Traynham Coles. Coles attended Buffalo Public Schools graduating from Buffalo Technical High School. From 1947 to 1949, he attended Hampton University, where his parents graduated in the early 1900s. He transferred to the University of Minnesota where he completed his undergraduate work. He received a Bachelor of Arts in 1951 and a Bachelor of Architecture in 1953, both from the University of Minnesota. In 1955, he completed a Master of Architecture Degree at Massachusetts Institute of Technology in Cambridge, Massachusetts.

He opened his own firm, Robert Traynham Coles, Architect, P.C. in 1963, which he has managed until retirement in 2012. It was the oldest African-American owned architectural firm in New York State and the Northeast. In 1964, he brought Saul Alinsky and the Industrial Area Foundation (IAF) to Buffalo to organize the city's poor. In 1968, he was awarded the commission to design the Health, Physical Education and Recreation Complex at the University of Buffalo's Amherst Campus. In 1972, he started the Community Planning Assistance Center of Western New York a community design center to bring technical assistance to community groups who wanted to develop their neighborhoods but lacked the funds to pay for technical assistance.

Coles has been involved in a number of civic, political and philanthropic activities, including council member of the Burchfield Art Center; Arts in America; Erie County Horizons Waterfront Commission, Board of Directors; Build a New City, Inc.; trustee, Preservation League New York State; trustee, Western New York Public Broadcasting Station. He has continued as an Honorary Trustee of the Western New York PBS since 1987. As a Fellow of the American Institute of Architects, Coles has served on numerous committees and task forces, such as the National Housing Committee, National Urban Design and Planning Committee, Social Responsibility Committee. He is also a member of Alpha Kappa Mu, and the National Organization of Minority Architects (NOMA), having served as treasurer and vice-president of that organization. Mr. Coles is married to the former Sylvia R. Meyn. The couple has two children, Marion Brigette and Darcy Eliot.

“A beautifully crafted debut memoir about an award-winning African-American architect who broke through societal barriers and helped others do the same . . . A multifaceted life story that will enthrall architecture and history buffs as well as scholars . . . this informative page-turner is suitable for both in-depth analysis or an afternoon browsing.”
– Kirkus Reviews 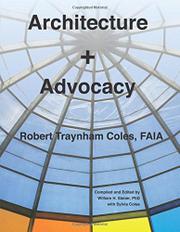 A beautifully crafted debut memoir about an award-winning African-American architect who broke through societal barriers and helped others do the same.

Written and compiled with the assistance of Siener (A Guide to Gloucester County, Virginia Historical Manuscripts, 1976) and Coles’ wife, Sylvia, this engaging account tells the story of a successful 50-year career and passion for social justice. Born in 1929, Coles was raised in the heart of Buffalo, New York. He attended the University of Minnesota as the sole African-American student in architecture and received his master’s from Massachusetts Institute of Technology. Founding his architectural firm in 1963, Coles’ love of the city and its people is reflected in his work. For example, he designed the award-winning Joseph J. Kelly Gardens housing complex to complement the community’s existing cityscape. Meeting and working with community organizers—such as the Rev. Richard Prosser and Saul Alinsky—allowed Coles to combine his thirst for activism with the occupation he loved. Commissioned by Prosser, Coles designed Buffalo’s “Friendship House,” a local hub for social programs, activities, and a food pantry. Dedicated to helping more minorities become architects (Coles referred to black architects as an “endangered species”), he hired 30 African-American architects and interns from 1964 to 2004. In 1995, he became the first African-American chancellor of the American Institute of Architects. Coles’ smooth-flowing prose is a pleasure to peruse, and his voice is memorable. For example, when a teacher discouraged Coles from becoming an architect because “there were no Black architects,” the young design student refused to give up: “Undiscouraged, I resolved to be an architect and one of the best.” Adorned with a variety of color and black-and-white photos and some of Coles’ designs, this informative page-turner is suitable for both in-depth analysis or an afternoon of browsing. Some of the photos—like one with Coles and Saul Alinsky—are particularly intriguing. The book includes appendices for further exploration, such as articles written by Coles.

A multifaceted life story that will enthrall architecture and history buffs as well as scholars.