Dr. Robert W. Walker holds a PhD in Social Psychology with a deep interest in how people interact with each other and how we fit into God’s creation. He has spent his entire life studying human interaction, as an educator, school administrator, sociology professor, pastor, business owner and operator, Christian game developer and currently author of God is Alive and Well. To fully understand the contents of this book, Dr. Walker did extensive research into the field of Quantum Mechanics with special interest in its composition of light particles and light waves that exist in all space, including us. What he discovered was, by connecting our Souls/Spirits with the Spirit of God, we have access to the creative power of God to perform the miracles in the Bible and even more. We see many super humans displayed in books and on screen and believe it is science fiction. Dr. Walker, from his own personal experiences, shows that many of those powers are more real than we can believe. 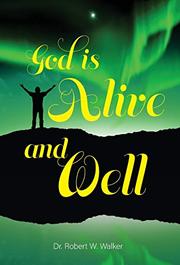 GOD IS ALIVE AND WELL

An avant-garde guide to spiritual wholeness.

Walker delivers an unusual introduction to the spiritual life, mixing New Age spiritualism, physics, and a surprisingly traditional view of the Bible. His work seems intended to invite readers into a closer connection with God through a kind of spiritual awakening, which he believes can unlock the potential for healing and even miracle-working. The author begins by asserting that God is composed of spiritual energy and that Jesus Christ (as well as the Old Testament prophets Moses, Elijah, and Elisha) worked miracles by using that energy, which he says is available to everyone. To access that energy, he says, one must go beyond the normal practice of religious faith and break through a spiritual barrier of one’s own “imbalanced energy” and bad karma. The author also asserts that a deep connection to God is possible because each person has God’s energy within him or her: “You have your Spirit/Soul within you, which is a piece of God’s Spirit that you received at birth.” Walker goes on to say that “quantum light particles and waves are God’s Creative Energy,” which he uses to create and order all things. By tapping that energy, everyone can have access to immense miraculous power, he says. The author shares a variety of personal experiences in which he says that he used his own spiritual powers to perform miracles as diverse as stopping a tornado and influencing the growth of his brother’s crops. Walker’s writing style is clear and engaging, and readers will be especially struck by his willingness to speak from the heart and tell deeply personal stories, such as the circumstances of his wife’s death or accounts of intense spiritual encounters. He shows an almost traditional respect for Jesus and a faith in the truth of Bible stories, but his insistence on developing an almost otherworldly connection to God will be off-putting to many readers. Most especially, his depiction of God as not omniscient, and even bordering on tangible, won’t sit well with traditional believers.

A controversial characterization of God as a being of perfect energy.

In the Beginning was the Word

What quantum calculations show is that we and our universe live and breathe in what amounts to a sea of motion - a quantum sea of light.

Teaching others in understandable language what quantum energy is all about and how close God really is to us.

This book examines how belief systems of teachers impact how they teach when change takes place.

Using Blessing and Trial cards, representing real life situations Christians encounter, moves the players either up or down a three dimension board culminating in reaching the Crown of Life at the top of the mountain.