Roberto Moulun, M.D., (1924-2013) was a master storyteller who became a prizewinning author for his magical realism in the style of Gabriel Garcia Marquez. His novella "The Iguana Speaks My Name" and ten individual short stories were published together in 2012, and Kirkus Reviews named the combined volume one of the top twenty-five indie books of 2012. It also won the Benjamin Franklin Silver Award from the Independent Book Publishers Association in 2013 for best first book of fiction. Both the novella and the short stories are set in the highlands of Moulun's native Guatemala during a time of civil war. Praise for the book comes from many fellow authors, including a review by poet Margaret Van Every: "This novella distills into a mere 110 pages everything that needs saying about the epic topics of war and peace, love and loss. In a voice uniquely his own, Moulun portrays the simple but profound pleasures of food, community, and the natural beauty of...Lake Atitlan in the Guatemalan highlands. Villagers earn their living and go about the routines of daily life while ignoring the encroaching civil war until, like a circling noose, it surrounds them and takes its toll....We are given no time frame for events that transpire in the novella. In that way it takes on a timelessness, becomes a sort of allegorical Eden in which innocence is inevitably lost. The villagers stay aloof from the senseless politics of war, but like victims of war everywhere, they are nonexempt from paying a terrible price." Poet/author James Tipton wrote in the Guadalajara Reporter: "I love the rich, profound, evocative, sophisticated, and often unpredictable prose found in lots of South American literature, in writers like Gabriel García Márquez and Isabel Allende. Nevertheless, the very nature of this type of prose makes its adherents vulnerable to the temptations of excess. In the prose of García Márquez, for example, I sometimes feel he grabs his image by its scaly tail and then hangs on so long that he is pulled too far into a dense jungle, while the story itself remains waiting for him until late into the night. Not so with the images of Roberto Moulun, who remains faithful to the brief courtship between his story and a metaphor." Author Robert Bruce Drynan wrote in El Ojo del Lago, the largest circulation English-language monthly magazine in Mexico: "As wide ranging as Moulun’s interests extend, his writing reflects the choice of his life work as a psychiatrist, his deep seated compassion for human vulnerability. His chapters in Iguana could stand alone as single anecdotes, each describing an aspect of the human condition; insightful displays of individual foibles and conflicting virtues. His Part Two: Ten Backyard Stories from Panimache, is indeed a collection of stand-alone anecdotes, but they cleverly tie together as a whole with Part One. Read his words, meet his characters, view his world, revel in his imagination and when you finish you will want to consider yourself a friend of Roberto Moulun." Born to a Spanish mother and French father in Guatemala, Moulun received his undergraduate B.A. and B.S. degrees from Instituto Modelo, Guatemala City, and his medical degree from the National University of Mexico, Mexico City. “I am a Spaniard,” he said in a 2012 interview for the introduction of this book, with a spike in tone that could have come from a conquistador. “I think I am a man of extreme passion." He was a man of many accomplishments during his professional career in Hawaii: successful psychiatrist, university faculty member, champion blue-water sailor, member of the diplomatic corps from his native Guatemala, and a volunteer mental health specialist for the America Red Cross disaster team. His residency and post-graduate studies were are Seton Psychiatric Institute in Baltimore, Maryland, and at the Menninger Foundation, School of Psychiatry, Topeka, Kansas, where he became supervisor of psychotherapy. After completing his residency in 1962 he moved to Hawaii and was Chief of Services and Psychiatric Supervisor at Hawaii State Hospital, Kaneohe, Hawaii, until 1967 when he became assistant clinical professor of psychiatry, John A. Burns School of Medicine, University of Hawaii, Honolulu. During his years in Honolulu Moulun was also honorary Guatemalan consul to Hawaii, recognized by the U.S. Department of State. After closing his practice in 1988 he lived briefly in Guatemala and Spain before returning to Hawaii in 1991, where he became a volunteer for the American Red Cross mental health disaster team, reaching the rank of specialist, and served in ten disasters in the USA and foreign countries. In 1996 he retired and moved to Ajijic, Jalisco, Mexico, where he lived until his death at age 89. 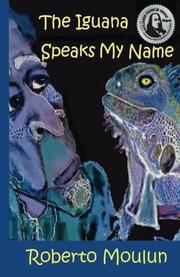 THE IGUANA SPEAKS MY NAME

Lush landscapes, enchanted happenings, tangled roots and violence suffuse this beguiling collection of stories set in the highlands of Guatemala.

Quince, the narrator of these interlocking stories, is a writer living in the village of Panimache, near three volcanoes and a deep blue lake. He serves as a keen observer of the vibrant, tense surroundings in a land that “bled from a war no one wanted to notice.” Panimache is a town divided by conflict, caste and consciousness. It’s teetering between bourgeois aspirations and Mayan peasant culture, seemingly placid but on edge from the fighting between government soldiers and guerillas and simmering with repressed bad memories. The title novella introduces a diverse, intriguing set of characters—shopkeepers and restaurateurs; Quince’s friend Uno, a nature photographer and reputed shaman; El Capitan Lobo, the urbane army commander who feels apologetic about the brutal counterinsurgency he’s waging (“[s]ometimes we massacre the Indians, other times it’s the guerillas”); and La China, a whore longing to be a muse. These and other figures recur in 10 more yarns that are often shot through with exquisite threads of magical realism: A youth is beguiled to his doom by a gorgeous vampire; a con man makes his living with a fortunetelling sparrow; a man’s frantic search for buried treasure yields an astounding payoff; an orphaned, ostracized Mayan girl hides herself in the shapes of birds and animals. Moulun’s clear prose balances sensual sounds, colors and foods against a deadpan humor and a detached, meditative mood. His writing has a fablelike quality, featuring strong narratives linked to mythic themes, but it’s also full of social nuance and subtle psychological shadings. Moulun transforms Guatemala’s troubled, complex reality into a rich, compelling aesthetic vision.