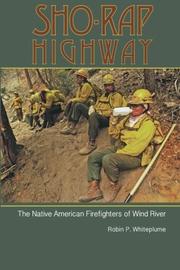 A Native American explores the history of the firefighting crews he served on for three decades.

As the Western United States suffers through another devastating fire season, the ranks of those fighting the blazes likely include hundreds of Native Americans. This is not a novel phenomenon. As debut author Whiteplume shows in his revealing history of the Sho-Rap Fire Crew Organization from Wyoming’s Wind River Reservation, “federal wildland fire agencies have depended on Native American firefighting crews since the 1940s,” providing “an economic boon for many Indian reservations.” Whiteplume, a member of the Northern Arapaho Tribe of Wind River, worked with the Sho-Rap crews for many years and he meticulously documents the evolution of Native American firefighting—from the Office of Indian Affairs’ establishment of a “general fire protection program” in 1910 to the organization of the first Sho-Rap crews in 1967. From rattlesnakes on the trails to “crabby” Sho-Rap bosses, the crews faced all the hazards of their trade and, remarkably enough, always returned from assignments without large-scale casualties or fatalities. “The everyday struggle for a people to survive made us stronger and less prone to carelessness when it came time to battle either enemies or nature,” the author asserts. Vivid details from the firefighting front and historical photos enliven the book. In Idaho’s rugged Salmon Country, Whiteplume “lost count of the number of headless rattlers we came across on our hike” to the front, all of them dispatched for the purpose of “removing a fireline hazard.” But the book largely fails to catch fire, in part because Whiteplume focuses on bureaucratic minutiae rather than the more intriguing elements of his story. Problems such as racism—the author recalls seeing a “No dogs, no Indians” sign in the front window of a diner—and alcoholism are mentioned only in passing and readers will learn little about the Sho-Rap firefighters themselves. The author, though, does succeed in giving historical weight to the craft of the Wind River crews, one that, unfortunately, may be fading into oblivion. Unless Native American firefighters are offered another opportunity to be “a positive force in America’s forests,” Whiteplume warns, “then the Sho-Raps along with some other native crews will be just another historical footnote.”

While it deftly captures the intricacies of firefighting, this book would benefit from more color and character development.