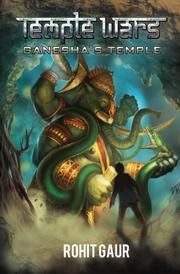 A teenage boy from Kashmir embarks on a quest to retrieve powerful objects for the elephant-headed god Ganesha in this debut fantasy tale.

YA fantasy novels based on Christian, Norse, Celtic, or Greco-Roman sources are legion, from the Narnia books to the Percy Jackson series. Less easy to find are stories drawing on Hindu myth and religion—a gap that this book helps fill. Fourteen-year-old Tarun Sharma lives in Srinigar, in politically unstable Kashmir, with his older brother, mother, and father, who is Kashmir’s chief minister. On the closing day of a festival celebrating the four-armed deity Ganesha, rebels set off a bomb among the revelers, then kidnap Tarun and his mother. The culprits’ truck crashes in the mountains; Tarun escapes, finding his way to a cave. Waiting for him is Ganesha, who needs Tarun’s help to journey to the Veiled Lands and regain three stolen, hidden mystical objects: the deity’s sacred ax, rope, and broken tusk. Recovering them will restore the god’s powers, reunite Tarun’s family, and “end the civil war both inside the Veiled Lands and in Kashmir.” As Tarun faces down dangers and difficulties, he gains new and powerful abilities, earning a place in the continuing fight against evil. Gaur writes a rousing, well-paced adventure story. Though the structure is familiar—a quest giver, three tasks, coming-of-age—in Gaur’s hands, it never feels stale. The tasks provide excellent settings for Tarun to test his wits and courage, show his mettle, and learn more of the Veiled Lands. In Candeuil, for example, Tarun notices the mountain city’s many carved rams’ heads: “Images of bighorn sheep had even been placed on every tenth cobblestone that lined the edge of the roadway. It gave the city an artistic unity.” More than that, the cobblestones turn out to help Tarun in his search. The novel’s ecumenical spirit is generous and intriguing, with hints of a worldwide (not India-specific) battle going on, such as a teenage girl’s mission to recover objects stolen from Gitche Manitou, the Algonquian Great Spirit.

Exciting, well-written, and thoughtfully humane, this YA adventure should win many fans.

Promoter of my whiskey brand