Ron Coury is a Las Vegas businessman, Marine and former Brooklynite. His memoir, Tenacity, tells the gripping true story of how he survived corruption and cancer to achieve the American Dream. During his more than 45 years in Southern Nevada, Ron has worked as a casino dealer, real estate agent, founder of a limousine service and a partner in bars, restaurants, major graphics and glass companies, along with several automobile dealerships in Nevada and California.

In the 1970s and ’80s, visionaries willing to go for it found Las Vegas to be a prime setting for fulfilling their entrepreneurial aspirations. As a “niche finder,” Ron and his partners pulled together concepts, identified funding and implementation, and enjoyed riding the wildest fun-filled roller coaster of business and life.

From growing up on the streets of Brooklyn in the ’60s and early ’70s to surviving the good-ole-boy and Wild-West business and political climate of old school Southern Nevada, Ron's “tenacity” enabled him to prevail against unethical, illegal and seemingly insurmountable obstacles. He also chronicles his biggest challenge of all, beating esophageal cancer 13 years ago against the longest of odds. 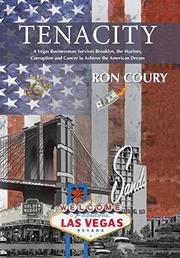 In this debut memoir, a native New Yorker recollects a life of entrepreneurial success and perseverance in the face of daunting adversity.

Coury came of age on the streets of Brooklyn in the 1960s, the descendant of grandparents who emigrated from the Middle East. Always attuned to the possibility of business opportunity, he started a rock band in 1970 and made considerable sums of money selling soda and beer (despite being underage himself) at his own concerts. The author was drafted in 1972 and chose to enlist in the Marines, and in the last six months of his service, he worked—as part of a job transition program—as a blackjack dealer at a minor casino. Coury was always looking for ways to advance, though, and he landed a coveted gig at the Tropicana on the Las Vegas Strip shortly thereafter. A restless entrepreneur, he bought his first bar in 1979 when he was only 27 years old, and by the age of 35, he’d either bought or founded seven other businesses. Coury’s account of commerce in Las Vegas focuses on its seedier side; he tells of confronting corrupt union reps who squeezed him for money, fraudulent regulatory commissions, and unscrupulous law enforcement officers. The culmination of the author’s tale comes in 1989, when, he says, a thieving waiter falsely accused him of torture. In this remembrance of his life and times, Coury provides an account that’s both dramatic and cinematic. The author’s story, as the title suggests, focuses on his indefatigable refusal to surrender, and readers won’t be able to help finding this to be an impressive virtue. The prose doesn’t offer many literary flourishes, but Coury does show himself to be a naturally gifted storyteller with a clear, informally charming style. Although the narrative largely focuses on his business exploits, he candidly discusses his childhood, his bout with esophageal cancer in the mid-2000s, and his happy marriage, as well.

Entrepreneur with Street Smarts Not Learned in Business School, 2019 How to Have That Tenacity, 2019 Esophageal Cancer Awareness, 2019