An American by birth, Rosalind Burgundy writes Historical Fiction in the twenty-first century of an ancient culture that existed 2600 years ago. Her enchantment with the amazing Etruscan culture began when she worked as Technical Illustrator and Curator for an archeologist in the Roman Forum. After forty years as educator, wife, grandmother, and world traveler, Burgundy returned to her life-long interest to create Odyssey of an Etruscan Noblewoman and two other Etruscan novels: Song of the Flutist and Tuscan Intrigue. She divides her time between California and Florida. 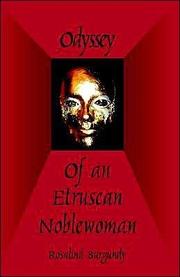 Odyssey of an Etruscan Noblewoman

An Etruscan noblewoman undergoes numerous trials and tribulations in another work of historical fiction from author Burgundy (Tuscan Intrigue, 2005, etc.).
The action begins in a tomb in Etruria, a region of central Italy. Dressed as a man (women cannot be scribes), Larthia enters the tomb of her ancestor princess-priestess Larthia on orders from prince-priest Zilath, a magistrate for whom she secretly scribes. Zilath desecrates the tomb, but the honorable Larthia is blamed. Kidnapped and separated from her homeland and her family, she is exiled for years, journeying through other regions, including Phoenicia and Egypt. Many are drawn to Larthia; some scarcely hide their jealousy as various VIPs recognize her talent as a scribe. Enduring misery and defeat, she nevertheless expresses gratitude and patience, remaining self-aware and wary, inherently alone, eventually distrusting even the gods who seemingly abandoned her. Repeatedly, she pays for her abilities: “I knew too much, more than my place.” Pacing is brisk in this insightful narrative weighty with historical detail. In her misadventures, Larthia is raped, forced to become a courtesan and nearly murdered before ascending to service as a priestess. It’s an impressive arc that works on multiple levels, as Larth/Larthia/Etrusca (her various names) traverses land and sea, seemingly at everyone’s mercy, increasingly doubting her faith. She is used and misused, and her lengthy separation from her homeland drains her of vitality. Yet she is a feminist in the making—a woman of integrity, intelligence and presence who wishes to keep the secrets of her native land even as she is coerced into divulging them. It’s a clever conceit that allows for comparison of Etruscan ways with those of other cultures, including Rome and Egypt. A map of her cosmos is included.
A historically based survival tale of lost heritage, homelessness and empowerment that ably incorporates regional traditions, customs and commerce.

Song of the Flutist

In the golden age of the Etruscans in central Italy, wealth, wisdom and artistic beauty abound. Gods, ancestors, prince-priests, augurs, artisans and servants all have stories to tell. Amidst pestilence, tyranny, deceit and murder, sophisticated Etruria thrives. Magnificent temples, sumptuous dwellings and roads with arched bridges dot the landscape. Men revere women. Women own property. Couples eat together at banquets wearing fashionable tunics and stylish leather shoes, while the rest of the cosmos goes barefoot. Family patriarch Vel the Soil Sampler, traipses high mountains to discover precious rocks and minerals, filling the coffers of competitors Zilath of Tarchna and Maru of Cisra. Wise Anneia the Healer, risks her life to cure the sick with herbs and poultices. Wanton beauty, obsessive Noblewoman Arith, connives to win fame and fortune. Noble child Venu's fate is sealed when he is caught aboard a merchant ship that sails to Eastern Mediterranean ports. Neglected homemaker, wife and mother, Noblewoman Risa's destiny is steered by a haruspex, a tomb painter and The Flutist. Throughout their lives, The Great Prediction, prophecy of what will happen to Etruria, clouds them. With hope for eternal contentment, the richest build opulent tombs. Yet, at death, it is the mysterious Flutist who must guide them on their journey to the afterlife.
Published: Nov. 10, 2010
ISBN: 978-1-4502-5662-9

An explosion in an Etruscan tomb sends renowned archeologist Montgomery Adams into an Italian hospital, seriously burned and comatose. His daughter, Amanda Oliver, a cultural arts historian and quasi-archeologist, rushes from San Francisco to his bedside. Simultaneously, the mysterious disappearance of Montgomery's assistant and lover, Joanna, brings her brother, lichenologist Trent Winston, to Orvieto. While the police are stalling the investigation, Amanda is chased, threatened, abducted and framed as she attempts to find the culprits herself. Stumbling into the complex world of obsessed archeologists, greedy collectors and murderous tomb robbers, Amanda learns they all seek a priceless, exquisite third sarcophagus of the Married Couple. Someone thinks Amanda knows where it is, and that someone wants her dead.
Published: May 5, 2005
ISBN: 0-595-67100-4