“Casagranda’s story is a bona fide page-turner that should have readers rooting for the tenacious Artemisia from beginning to end. A gripping, fast-paced adventure that delivers passionate writing.”
– Kirkus Reviews 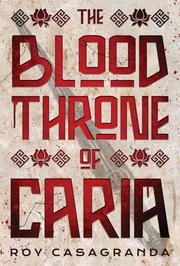 THE BLOOD THRONE OF CARIA

A determined Carian princess rails against a patriarchy in this debut historical novel.

At the impressionable age of 13, Princess Artemisia outruns her bewildered aides and climbs a tree to witness a great battle between the Carian and Labraundian forces in the early fifth century B.C.E. Her father, King Lygdamis, leads the Carians into combat, and at his side stands a fearless female warrior. Artemisia learns from her bodyguard, Myron, that the fighter is Persian. Persians permit women to enter into battle. Artemisia is consumed with envy, as no such allowance is given to the women of Caria. When the princess declares that she too wants a life of glory and struggle, she is told that as a girl she should know her place. From that moment on, she makes a vow to herself that she will become a satrap, a warrior ruler. When Emperor Darayavahu requests a hostage to take to Persia, Lygdamis flinches at the thought of losing his only son and instead negotiates for Artemisia to be taken in his place. So begins the princess’s journey into womanhood. Away from the confines of Caria, she develops an unblinking confidence that allows her to reason with the emperor himself. She also convinces Myron to train her in combat, in which she proves to be devastatingly skillful. Slowly, Artemisia develops the necessary talents to gain a foothold in a world where women are subservient to men. But is this sufficient for her to achieve her dream of replacing her father as king? Those familiar with ancient Greek history will know how the story unfolds. This is a riveting tale of a defiant young girl who dares to challenge patriarchal norms. Casagranda has an agility and fluidity to his writing that are particularly evident when describing combat: “Artemisia realized that her Milesian opponent was as surprised by the stumble as she was. Instead of fighting it, she moved through it, ducking down and then thrusting the tip of the blade up. It found the soft underside of the Ionian’s chin.” The urgency, rhythm, and motion of battle are captured vividly. But on occasion, the author is prone to repetition. For example, he often describes events occurring in the heroine’s peripheral vision: “A person walked into Artemisia’s peripheral view.” This isn’t off-puttingly irritating but perhaps indicative of an unseasoned writer leaning on favored words or phrases. The novel is dedicated to “all the victims of patriarchy,” and although it succeeds in depicting men as blundering and bloodthirsty rulers, there is a nagging doubt as to whether a leader such as the masterful Darayavahu would unravel emotionally and admit his failings: “You see me as all-powerful, but I’m weak….You’d think that” having an empire “would make me like a God. But it makes me a slave to one thousand masters.” Still, despite some minor weaknesses, Casagranda’s story is a bona fide page-turner that should have readers rooting for the tenacious Artemisia from beginning to end.

The Blood Throne of Caria

Man is not a rational animal; he is a rationalizing animal.

Everything from Gibraltar to the Indus River.