Writer, actor and commentator on stage, radio and film. Roy Ness lives near Whitehorse, Yukon and keeps busy growing things while building a new house for the family and their old dog Wayne. He is currently working on a new novel and a musical play.

“An uplifting read that informs, enlightens and satisfies.”
– Kirkus Reviews 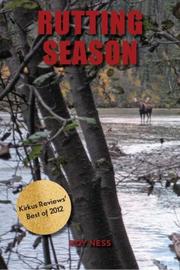 In addressing both man against nature and the nature of man, Ness’s novel raises challenging questions about the balance between hunting for sport and hunting for survival.

Survival of the fittest plays out with personalities and past regrets in sharp relief, as hunter and hunted confront unforgiving nature in the remote Yukon. The story skillfully weaves together the lives of seemingly disparate individuals into a conflict-ridden tapestry of self-discovery. The principal storyline centers on high-profile eco-warrior Hannah Weinberg. Her mission: to confront and raise public awareness of the wealthy trophy hunters who scour the remote Yukon Mountains in search of grizzly bears. The titular figurehead of a save-the-bears group called Grizzly Watch, Hannah meets her perceived nemesis in Dan MacKay, an unemployed, half-Indian moose hunter who lives in a small First Nation community. Dan runs into a lost Hannah while hunting moose on the Macmillan River. Elsewhere, Dan’s attorney, Susan Field, is driven by conscience rather than cash to uncover the truth about Dan’s ex-wife, Tara, and her suspicious pedophile boyfriend, Gary. Seems Gary has taken an interest in Dan’s preteen daughter, Starla. Another intersecting storyline revolves around Hannah’s husband, David Hellman. Rich and powerful, he cheats on Hannah, but when she’s reported missing, David swings into action and hires Yukon mountain experts to accompany him on the search. At times, details in the supporting storylines run too deep and risk overwhelming the central story. Thinning them  a bit in favor of the Dan–Hannah relationship, and how their initially opposing views slowly begin to dovetail, could improve the novel’s focus. Adding an extra dimension to the narrative are the internal dialogues of several animals. Raz, Dan’s loyal, well-trained hunting dog, expresses his own feelings and insight about “his Dan” and the new girl, Hannah. Raz eventually becomes indispensable to both the hunt and Dan’s survival. There’s also a “talkative” raven who provides some whimsical observations about human “bobbleheads” and their strange habits, and several moose express their feelings and various sexual pangs. Finally, there’s the heartbreaking struggle of a gut-shot bear, lumbering through the forest to find relief from the pain that accompanies his every step. Richly detailed and generously storied with characters both sympathetic and loathsome, this is the action-adventure novel for wilderness enthusiasts.

An uplifting read that informs, enlightens and satisfies.