Richard (R.P.) Heinz is a writer of literary fiction based on the vast collection of people, places, and experiences he has encountered over the sixty plus years of his event filled life.
For over thirty years he worked his way through the ranks of the retail automotive business where he rose from cleaning cars at age fifteen, to owning and operating franchised new car dealerships.
He retired from the auto business at the age of fifty, at which time he earned a college degree and began his formal writing career. The unique relationships he has developed over the years with characters from all walks of life give his writing a genuine, and credible, tone. He resides in Newport Beach California and Telluride Colorado with his wife Susan, and Winston, his faithful dog.

“A coming-of-age tale that bridges cultural gaps with sincerity and laughs.”
– Kirkus Reviews 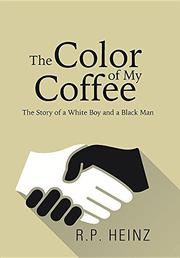 THE COLOR OF MY COFFEE

In this debut novel, a white suburban teenager runs a car detailing service in 1960s California, finding among his employees a mentor in a charismatic, Southern black man.

Steven Reilly’s home life is a struggle—his mother is all but rendered inert by mental illness, while his taskmaster father demands that, despite his young age, he pay rent to continue living at home. Steven takes over a company his older brother started, cleaning cars for dealerships around smoggy Los Angeles. To help him run the business, he hires Herb Jackson, a middle-aged African-American from the Deep South, wise in the ways of the world and eager for a job. A strange relationship develops with Steven as employer and Herb as adviser, drawing the younger man out of his shell while introducing him to the other cultures of the eclectic characters who join the business. They range from the geriatric polish-expert Speedy Dave to the potbellied West Virginian Andrew Calhoun, who brings his entire Appalachian clan, from his two sons to his mother-in-law, to work when necessary. But Herb, while principled, is far from perfect, and his gambling problem will soon lead the members of the car wash’s patchwork family into conflict with the dangerous, ascot-wearing, slick-haired bookie called “The Roach.” Heinz’s tale is presented in the form of a memoir, with its colorful cast of characters based on equally outlandish individuals from the author’s past and many of its events pulled from his own experiences dealing with cars. Motor enthusiasts will find many classic vehicles to wax nostalgic over, while the conversations that happen within these autos among Steven, Herb, and the others, complete with tall tales about chasing “poosy,” are always entertaining. The book’s commitment to rendering all the dialects of the wildly different characters is surprisingly smooth though somewhat problematic: accents are only affected by players who are lower-class or unconventionally educated. Race is a hot topic, particularly as it concerns Steven’s evolving awareness of the concept. But it does feel slightly underdeveloped, as the novel itself admits that the civil rights movement is just starting to make waves on the West Coast at the time the story is set.

A coming-of-age tale that bridges cultural gaps with sincerity and laughs.