Dr. Russell Kussman received his Medical Degree in Boston in 1972, then completed his Internal Medicine post-graduate training at Harvard University and Stanford University Medical Centers. Certified by the American Board of Internal Medicine, he worked as an Emergency Room Physician before taking a position as Assistant Professor of Medicine at the University of California, San Francisco School of Medicine, where he was Director of the UCSF Home Care Service.

Dr. Kussman obtained his Law Degree from U.C. Berkeley (Boalt Hall) School of Law in 1981. He practiced as an attorney for nearly 30 years, representing patients injured by medical negligence, as well as defective drugs and medical products. He was nominated seven times as Trial Lawyer of the Year by the California and Los Angeles Consumer Attorneys Associations and was listed in "Best Lawyers in America" for fourteen years. The author has been a speaker at numerous conferences for attorneys, judges and physicians, and has appeared on many local and national TV news programs, such as CNN's Larry King Live, the CBS Evening News with Dan Rather, and ABC Nightly News with Peter Jennings.

In 2010, Dr. Kussman was appointed Judge of the Los Angeles County Superior Court by Governor Arnold Schwarzenegger, and he served on the California bench until 2016, when he retired. During that time, he also served for eleven months as a pro-tem Associate Justice on the Court of Appeal, 2nd Appellate District, where he authored several major published opinions involving matters of public policy, such as federal railroad rights of way and citizens’ access to records of public interest.

Judge Kussman lives in Los Angeles with his wife Kim, near their four children and an expanding band of grandchildren. 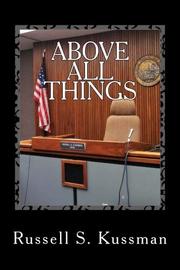 A lawyer’s remembrance of the trial that changed his life.

When debut author Kussman first became acquainted with the particulars of Theresa Kayne’s legal case, he was both moved and frustrated. She had struggled to become pregnant, so her obstetrician, Fredrick Henley, administered injections of delalutin, a female sex hormone that mimics the effects of progesterone, which is naturally produced by the female body. She later learned that she was actually already in the early stages pregnancy at the time of the injections. Henley assured her that delalutin posed no risk to the fetus; however, her son, Joshua, was born without functioning arms or legs. Kayne intended to sue both Henley and E.R. Squibb & Sons, Inc., the colossal pharmaceutical company that manufactures delalutin, but she couldn’t find a lawyer to take the case, apparently because no one could find an expert witness who would testify that the hormone could cause birth defects. Russell’s firm didn’t want the case either, but he thought, contrary to prudence, that it was winnable. He left his firm and started his own, though he was only a year out of law school and had never tried a case before. The author provides a stirringly dramatic account of the three-month-long trial that eventually garnered national attention as well as a look into the inner machinations of the pharmaceutical industry that successfully stifled the promulgation of scientific findings and warnings that likely would have diminished its profit.  Despite his lack of experience, Russell was uniquely positioned to try the case for the same reason he’s now uniquely positioned to tell its story—before he was a lawyer, he was a practicing physician. Much of the power of his remembrance is a function of his unfiltered candor, which includes self-criticism. He realized that he was outclassed by his legal adversaries and, at one point, in deep trouble: “I could see from the reality of an actual trial courtroom that I was a fish out of water; that it would be impossible for me to do this on my own. I was jeopardizing Josh’s future and my own law license.” Still, even after Russell sought out the help of a much more seasoned attorney, he torpedoed the partnership by hubristically insisting on being the lead lawyer, a self-effacing analysis he unforgivingly supplies. While the memoir focuses on the trial itself and its legal details, Russell also affectingly reflects on his own personal life—certainly one of the reasons he was so moved by Kayne’s plight was that his own wife was pregnant at the time he took her case. Further, he astutely explores his own defiant brand of ambition. He abandoned a promising career as a physician to become a lawyer, only to quickly exit an enviable job at a well-known firm to set out in his own. At different junctures in the story, he seems by turns impressively confident and self-destructively arrogant.

A captivating blend of legal suspense and introspective memoir.

IndieReader Review: ABOVE ALL THINGS, 2019

A pseudo-scientific story of how (and why) the basic elements -- Carbon, Oxygen, Hydrogen, and Nitrogen -- were used to create life on earth.