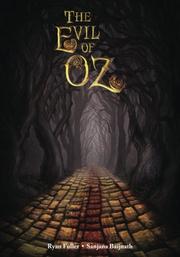 THE EVIL OF OZ

In Fuller and Baijnath’s debut graphic-novel reimagining of L. Frank Baum’s classic, Dorothy returns to an Oz corrupted by evil in a tale of bloody retribution.

Dorothy Gale returns home to find Uncle Henry and Aunt Em dead, their hearts cut from their chests. She clicks her silver shoes together, grabs an ax, and rides a tornado back to the land of Oz for vengeance. But something’s terribly wrong in Oz: the Munchkins have turned into vicious creatures with sharp teeth, and Dorothy’s friends, including the Tin Man, aren’t quite as genial as they once were. It seems that Glinda the Good Witch, who’s taken over the Emerald Throne, is no longer good and has allowed Oz to fall into ruin. Dorothy, the self-proclaimed “Witchkiller,” follows the yellow brick road to stop Glinda’s reign and find her loved ones’ murderer. Writer Fuller and artist Baijnath’s collaboration is unquestionably adult, opening with cops at a bloody crime scene. The bare-bones story focuses mostly on Dorothy’s revenge, leading to pages of nothing but action; Dorothy’s fighting off aggressive Munchkins (who literally munch) is essentially a massacre. Fuller, however, does ensure that readers see recognizable faces, including the Wizard, as well as unexpected consequences of Dorothy’s first visit, like the Cowardly Lion’s no longer having fear and becoming a beast. Baijnath’s bold artwork is impressive: images are full of atmospheric swirls, including the incessantly curving yellow brick road, as if characters are caught inside a cyclone. There are also plenty of flying body parts and loads of blood, so much that Dorothy’s silver shoes resemble the more popular shade of ruby. But Baijnath’s best visuals are the story’s calmer moments, as in the unmistakable elegance of Dorothy’s wordlessly trekking through the rain in a desolate Oz and approaching the blinding light of the Bright City. The writer and author take the story seriously, none of it tongue-in-cheek. Still, it’s hard not to smile when Dorothy declares, “I will not leave until the yellow brick road runs red with the blood of my enemies.”

An assertive, endearingly deranged take on the well-known tale from a writer-artist duo readers will want to keep their eyes on.