Ryan Masters is a writer and poet from Santa Cruz, CA. He spent a decade on staff at the Santa Cruz Sentinel and The Monterey County Weekly. He is a frequent contributor to The Surfer's Journal and former poet-in-residence for the City of Pacific Grove, CA. The author of a chapbook, below the low-water mark, his work has also appeared in publications such as The Iowa Review, Catamaran Literary Reader and Unlikely Stories. Above an Abyss: Two Novellas (Radial Books, 2018) is his first collection of fiction.

“A pair of quietly disturbing tales that will surely resonate with readers.”
– Kirkus Reviews 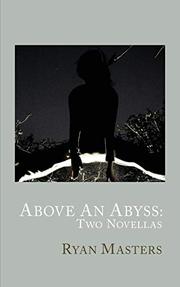 In this debut book, two novellas focus on loners whose seemingly unremarkable lives simmer with darkness.

In Trampoline Games, 12-year-old Jake Lore and his mother move to Sandy, Utah, in the summer of 1986. His father remains in California on business while Jake adjusts to an almost exclusively Church of Jesus Christ of Latter-day Saints neighborhood. He’s immediately smitten with Debra Hanson, the girl next door who’s the same age, but even more drawn to neighbor Finn Levy. The two boys jump on the Hansons’ trampoline when the family attends Sunday morning church. But their activities become increasingly riskier and more violent: poltergeisting homes (nightly invasions to move around or take small items) or throwing lawn darts with little warning to others. In the more mysterious The Moth Orchid, Alasa Memnov raises orchids in Fairbanks, Alaska, and periodically visits her mother, Bebe, in a nursing home. That’s where research physician Dr. Rene Funes approaches Alasa. Evidently, Bebe had given Funes her daughter’s genetic material years ago, and Alasa is susceptible to the same rare form of dementia afflicting her mother. The doctor suggests Alasa return to her hometown of Lotus as a “cognitive exercise.” Though the intent is to aid her memory, the trip may instead prove too revealing for Alasa. Masters skillfully puts ordinary characters in troubling and sometimes-dire circumstances. Jake, for example, is a typical tween (he gets gum in his hair) while Finn introduces precarious elements into the boy’s life, like ingredients for a bomb. In the same vein, Alasa’s hometown excursion is nostalgic but also becomes a struggle to remember her past. Both disconcerting novellas have startling turns, including a sudden physical assault in Trampoline Games that may be the book’s most horrifying moment. Though Orchid relies heavily on a late twist, it doesn’t make its coda any less unsettling. The prose, like the stories, is somber but lyrical: “Bright, crisp stars shone like tiny holes poked in oilcloth, as if the night sky had been draped over an adjacent world made of blinding light.”

A pair of quietly disturbing tales that will surely resonate with readers.