S. Snyder-Carroll is a student of secrets, the kind we all keep, the kind viable characters in any fiction need to have. Her four novels written over the past four years showcase her talent for creating memorable characters, putting them in impossible situations, and in settings that beg to be brought to life on film. Her fast-paced trilogy is a mediation on one woman's long term struggle to stop making disastrous choices. Her latest, an alternative sci-fi thriller, introduces a dynamic heroine scientist/sleuth who gets caught up in an international struggle to control the world.

Snyder-Carroll has taught English, Creative Writing, and Journalism. She is a former consultant to the Princeton University Teacher Prep Program and one of the founding teacher/advisors to the Geraldine R. Dodge Poetry Festivals. She is a member of the Palm Beach Writers Group, Poets&Writers, and the Association of Writers and Writing Programs.

“The writing is chock-full of rich imagery and cringe worthy descriptions...with a character-driven plot and fast-paced storyline, the tale should easily keep readers engaged.”
– Kirkus Reviews 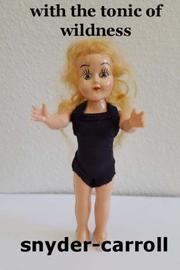 WITH THE TONIC OF WILDNESS

A destitute middle-aged woman claws her way back from financial and emotional devastation.

This final installment of a trilogy follows the ill-fated Hester Randal as she struggles to cope with the many disappointments of her past. When the novel opens, Hester is living in an abandoned trailer park, still smarting about the husband who cheated on her and the baby she effectively abandoned. Her main goal is to devise a way to return from Florida to the baby she left behind in New Jersey with her father, Jimmy Raymer, and his new wife, Cecilia. Unfortunately, Hester has no money to her name, and no means of traveling to New Jersey. Despite the promises that the couple made to her about sending progress reports on baby Pearl, they have failed to respond to any of Hester’s calls, or communicate in any manner whatsoever. Hester grows increasingly concerned about her child, and she finally resolves to start making changes. To her great relief, she lands a job as a waitress at a local diner, a position she considers beneath her, but is thankful to have secured after the scandals of her past (“She was focused on making money, and the Woolbright Diner was the place where this had a chance of happening”). Hester begins to adjust her self-image, determining that nothing will stop her from returning to her daughter. She also starts developing a relationship with a kind and handsome man who lives nearby, giving readers hope that she might yet create a satisfying life for herself. Told in the same accessible prose as the previous books of the trilogy (On the Edge of Dangerous Things, 2013; In an Awful Way, 2014), the finale wraps up many loose ends. But the narrative has a slower pace, with too much of the book devoted to rehashing the events from prior installments. Even so, Snyder-Carroll (Click…Kill, 2015, etc.) holds the reader’s interest by continuing to introduce new complications, including natural disasters and run-ins with old foes. The second half of the gritty novel moves more quickly than the first part, as many old plotlines alter their previous courses.

A meandering and sometimes-twisted tale of uphill battles and unexpected determination. 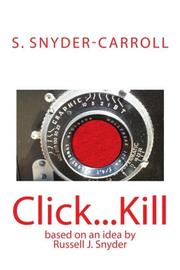 In this alternative history/sci-fi novel, a woman vows to re-create her husband’s invention, which could be a powerful weapon.

It’s 1940, and 22-year-old Howard Russo, an American inventor studying at Oxford University on a Rhodes Scholarship, has been developing a prototype for a camera that could be “hooked up to a computer” (itself such a new creation that he has to explain “Computers are real”). The computer could then be programmed to manipulate photographic images, Howard believes; not as Photoshop does now, but by capturing “someone’s soul, mind, whatever.” The photos would show people the inner truth of things, and make “this goddamn world a better place.” When the American and British governments ask Howard to take aerial photos in the Caribbean, he agrees—but Noboru Industries, a Japanese camera company, steals his prototype and the inventor winds up dead. After learning the truth, Howard’s wife, Sylvia, an engineering student, pledges to re-create the device, using her husband’s notes, and exact revenge. Over 20 years, Sylvia pursues groundbreaking computer research, first with Alan Turing, then at IBM-like Lansing Technologies, where she rises to the top. Meanwhile, Noboru’s resentful, power-hungry head engineer Masuki Shin tries to perfect the stolen prototype—for mind control, not to reveal anyone’s inner essence. In 1963, Masuki plans to focus his camera on the American presidency, but not if Sylvia can stop him. Snyder-Carroll (With the Tonic of Wildness, 2016, etc.) writes a fast-paced thriller that is strong on description, especially in the Caribbean section: “Hundreds of bananas growing out of crimson beaks, leaves as big as doors, trees strangling other trees.” But her characters can seem overwrought, even in their dramatic circumstances, and often selfish; Howard, for example, nearly rapes a young woman, only stopping when he notices his cat staring at him, and Sylvia mind-controls someone she cares for. But the book’s major stumbling block remains its impossible-to-believe, soul-capturing, mind-controlling central invention. Perhaps the concept would be more successful if cameras and computers were less familiar, but readers understand that they don’t work by magic. 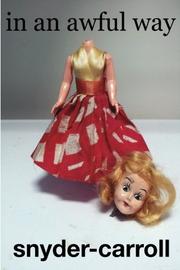 IN AN AWFUL WAY

A down-on-her-luck divorcée falls for a younger guy and faces one disaster after another.

This second installment of The Dangerous Things Trilogy continues to tell the story of hapless Hester Randal. Following the catastrophic demise of her marriage in the first novel (On the Edge of Dangerous Things, 2013), middle-aged Hester is now single, broke, unemployable, and effectively homeless. In order to make ends meet, she is forced to sell many of the valuable belongings she has acquired over the years. She ends up at a flea market in Lambertville, New Jersey, where she sells her treasures for far less than they are worth. The strapping young owner of the flea market, Jimmy Raymer, takes pity on Hester, his altruism culminating in their drunken lovemaking in the back of a van. In his post-coital guilt, Jimmy offers Hester lodging in the closet of his office at the flea market. Meanwhile, Jimmy reunites with his ex-fiancee, Cecilia Kurts, a woman who brings nothing but misery to Hester’s already complicated life. As Hester tries to navigate her personal difficulties, her relationship with Jimmy and Cecilia grows increasingly precarious, and the reader fears for Hester’s sanity as well as her safety. In this raw and gritty sequel, Snyder-Carroll (Click…Kill, 2015, etc.) unapologetically details Hester’s many mistakes and miscalculations, decisions that repeatedly sabotage the character’s own happiness. The writing is chock-full of rich imagery and cringeworthy descriptions of the deterioration of Hester’s physical appearance and personal hygiene as she battles poverty (at one point, she muses about “rummaging through the trash and sleeping in the same clothes for a couple of weeks now”). With a character-driven plot and fast-paced storyline, the tale should easily keep readers engaged. Despite the accessible nature of the narrative style, the book tackles many weighty topics in this sobering story, ranging from mental health issues and sexual identity to infertility, blended families, and child custody. Suspenseful situations and improbable hope should keep readers turning pages as they race to determine whether Hester will ever manage to get anything right. Loose ends abound at the tale’s conclusion, leaving plenty of room for the next installment.

A heartbreaking commentary on the importance of making sound choices. 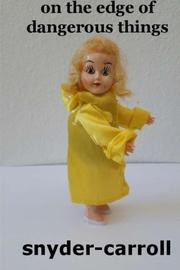 On The Edge of Dangerous Things

In Snyder-Carroll’s first novel, a married couple grapples with secrets and lies below the facade of their life in a picture-perfect Florida community.

Like Hester Prynne in Nathaniel Hawthorne’s The Scarlet Letter (1850), Hester Murphy spends much of her life confronting sexual mores, shame and deception. As the book opens, a hurricane is wreaking havoc on Pleasant Palms Trailer Park, where Hester and her husband, Al, have been living for years. While looking for her husband to make sure he is safe, Hester finds him in a compromising position—in bed with their adopted daughter, Nina, who appears to be gravely injured if not dead. From this gripping beginning, Snyder-Carroll jumps back and forth in time to present some of the sordid details of Hester’s life, her marriage to Al and the circumstances that brought Nina into their lives. As Hester tries to decide how to proceed with the choices before her, the anecdotes about her past demonstrate that “being married to Al Murphy was, since the first day she met him, all she ever wanted”—an obsession that leads her down a dangerous path. Snyder-Carroll creates a complex female heroine in Hester, who is, refreshingly, not always sympathetic; however, it is unclear how much of Hester’s perspective is meant to be unreliable. To the reader, Al’s flaws are so clearly delineated that Hester’s blindness appears almost dense rather than pitiable and rooted in complicated sexual obsession. The secondary characters can come across as a bit flat, including Nina, whom Hester suspects of being “a little actress who wants some attention.” The constant jumps in time are confusing, and the plot grows more and more soapy until it reaches its final Gothic twist, which is straight out of a Faulkner novel, without the stunning prose. Snyder-Carroll seems to be trying to weave in too many stories at once—a thriller plot of infidelity and murder, a satire of suburban social mores, even a moral and religious meditation on sexual impropriety. Focusing on one of these threads and narrowing her gaze might have helped shape some of the ideas into a more compact, readable novel.

A sprawling novel of adultery and deception whose ideas don’t quite live up to their potential.

She felt light and transparent, a little less than a god, or, at long last, a part of God.

love is all you need

The World of Kurt Vonnegut: A Hot Mess

While a down and out teenage addict is on a plane to rehab, he notices the weird behavior of a fellow passenger and reacts without thinking which sets off a chain of ironic events.

With the Tonic of Wildness

The last in THE DANGEROUS THINGS TRILOGY, With the Tonic of Wildness follows Hester Randal back to the deserted Pleasant Palms Trailer Park where, as she attempts to pull her life together and heal the wounds of a tragic loss, she encounters a man who may be, the best, or worst, thing that ever happened to her.
Published: Nov. 15, 2015
ISBN: 13:9781517431518