Sage Steadman was awarded a master’s degree in social work from the University of Utah. While pursuing her passion for writing, she worked as a licensed mental health therapist. She published her debut novel, "Snowflake Obsidian: Memoir of a Cutter," in 2010 under her pen name, The Hippie, and re-released the second edition under her real name. The novel has been deemed an “idyllic” read, filled with love, humor, romance and heart. She is also the co-author of the gritty and inspiring historical fiction novel, "Upon Destiny’s Song," alongside classical guitarist, Mike Ericksen. She is also the author of the YA novels, "The Waking Dream," and "Ann, Not Annie." Sage is heralded as a talented writer who tackles her novels with a witty, raw and honest approach. She currently lives near Salt Lake City, Utah with her family.

“In Steadman’s (The Waking Dream, 2016, etc.) third YA novel, a high school nobody encounters the harsh reality of what it means to become somebody.”
– Kirkus Reviews 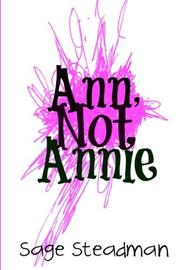 In Steadman’s (The Waking Dream, 2016, etc.) third YA novel, a high school nobody encounters the harsh reality of what it means to become somebody.

Annie Julia Grey (who doesn’t like to be called “Annie,” preferring “Ann”) is a high school student who spends a lot of time in detention with her troublemaking best friend, Lisa. A year ago, Ann’s father died in an accident, her mother became an alcoholic, and her brother, William, left for college with no intention of ever coming back home. Ann often finds herself alone, saddled with responsibilities her mother used to shoulder: cooking, cleaning, and caring for her younger brother, Tommy. At school, she pines for Jacob Waters, who also happens to be “the hottest senior in school.” Meanwhile, her eccentric (and handsome) classmate Danny Feller, who readers later learn is the book’s narrator, has feelings for her. After a few passed notes, Ann and Danny discover their mutual interest in Henry David Thoreau’s Walden—a book that William once owned. Ann desperately combs through the book “in hopes of discovering why he never came home.” However, as soon as Ann starts to fall for Danny, Jacob breaks up with his own girlfriend and—much to Ann’s surprise—begins aggressively pursuing her. Almost overnight, she goes from feeling invisible to becoming a member of the “Totally Fabulous and Popular clique,” otherwise known as the “T.F.P.” The book is an immersive experience, and it reads very much like a novel-length note from a friend in one’s class—complete with hand-drawn comic strips interspersed throughout. Not unlike a note written by a teenager, the prose is prone to hyperbole, and there are places in which the teenage voice feels exaggerated: “At this particular moment, Ann Julia Grey was in denial about Danny Feller’s obvious magnificence. (Tragic sigh.)” Overall, however, Steadman captures the mania of teenage friendships and first loves as aptly as she captures the confusion of adolescent grief.

A read that honors the devastation of loss and self-discovery from a distinctively adolescent perspective.

I Am The Messenger, An Abundance of Katherines, The Giver, Slam, Gone With The Wind, The Night Circus

"You may tell a tale that takes up residence in someone's soul, becomes their blood and self and purpose. That tale will move them and drive them and who knows what they might do because of it, because of your words." - Erin Morgenstern, "The Night Circus

Snowflake Obsidian: Memoir of a Cutter

Willow's your basic potty-mouth Mormon hippie with anger issues. Despite her parents fighting, her life is seemingly perfect. She has lots of friends, little responsibility and a stunning collection of sequined pillows. But everything changes when she and her best friend fall for the same guy. River is sexy, mysterious, and likes to eat peanut butter and jelly sandwiches. But there is something more behind his troubled jade eyes that draws Willow in. Relationships are tested and Willow ends up friendless and alone as she navigates the rough waters of a fiery first love. Soon, the illusions of her perfect world crumble and Willow must reexamine the beliefs that once built her rocky foundation. This quirky coming of age story follows Willow and River’s unlikely romance as they battle their own inner demons and struggle to find themselves and their place in the adult world.
Published: Dec. 15, 2010
ISBN: 978-0997056525

The summer after graduation three teens living together in a small town reevaluate their lives as they question their respective futures. Jen reconsiders leaving for college as she battles to break free from her abusive relationships and pines after her emotionally distant and brooding best friend, Gabe. Gabe reels from the loss of his twin sister, Ginger, and continues to write her letters as he struggles to keep the promises he made to her before she died. Noah looks for a new relationship as the secrets from his past begin tearing him apart at the seams. Paths cross and come to a head in this poignant drama about the struggles of breaking free. "The Waking Dream" will hook you from the first gut-wrenching letter to the last heartbreaking twist in this stunning novella's reflection on true valor and the burgeoning of the soul.

"Upon Destiny’s Song" is a remarkable story about sacrifice, courage and love. Ane Marie Madsen was only ten-years-old when she immigrated to Utah with her family. She was numbered in the ill-fated Willie Handcart Company of 1856, which saw the deaths of almost a third of the company when winter storms hit Wyoming. After settling in Utah, Ane Marie’s faith is tested once again as her path moves through the misadventures of colonizing a new territory ridden with danger and disease. Over 150 years later, descendent Mike Ericksen retells this epic journey and discovers lessons for his own modern sojourn. Ericksen has previously told the story of his ancestors harrowing trek through song and speaking engagements held across the country. Now the amazing story and its beautiful message is finally available in "Upon Destiny’s Song."