Sala Deib's work in Canada and overseas has earned him several awards for engineering excellence and innovations. A member of the Association of Professional Engineers and Geoscientists of British Columbia, Canada, Deib has given numerous talks on innovation and green buildings systems throughout his career. While practicing engineering, Deib wrote short stories and articles for magazines. He recently chose to focus on his long-time passion for writing and completed The Novel World of Angela Crown. 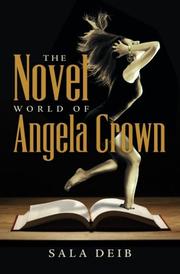 The Novel World of Angela Crown

In Deib’s debut novel, a personal tragedy leads a woman to obsess over the fates of fictional characters.

It’s been over a week since Angela Crown entered Vancouver General Hospital, deep in shock after Mark, her fiance, and John, her father, were killed during a bank robbery. Her sister, Maggie, takes her home, where they both hope that the warm familiarity will help heal Angela’s shattered mind. She begins seeing a psychiatrist, Dr. Price, and returns to her love of reading. She soon realizes, however, that she has no tolerance for the physical and mental pain that the fictional characters experience. At a book signing, she attacks author Bruce Darling, calling him a criminal for the way he’s tortured his creations. Angela then decides that she’s a “Professional Reader” who must “intervene and rehabilitate depraved plots.” Writer Martin Magier is her next target after his new novel, Sara’s Tragedy, has a successful launch. Soon, she starts believing that her own life is a novel, and although she couldn’t save fellow characters John and Mark, she’s determined to save others. To that end, she refuses to abandon Sara to the cruel end that Magier has written for her—and not even the boundaries of reality can stop her. Deib’s intriguing concept will have readers wondering about the suffering that Angela’s character goes through as the narrative unfolds. The author creates a neat, unique fantasy setup: Angela can interact with characters in fictional worlds—but only as a ghost. She also finds that Magier’s fictional creations worship him as a god, which layers the tale with effective religious commentary. The text frequently shines with simple metaphors that book lovers will understand quite well: “Angela devoured each word and each page like parched soil receiving heavy rains.” Sometimes, though, the prose is a bit overcooked: “Like small fish glued together forming a gigantic shark, they swept across the land as if they were a powerful tsunami.” The sentimental finale leaves plenty of questions open for a potential sequel.