Award-winning author, Sally O. Lee earned her BA in Studio Art and Art History (with distinction) from Colby College and then went on to study graphic design and painting in Boston (Art Institute of Boston) and in New York City (New York Studio School). She has had several shows of her work and received an art grant from The Massachusetts Institute of Technology to conceive and create a series of paintings, and from this came her 2002 exhibition- A Journey Into Abstraction. Some of Ms. Lee's paintings are in various private collections in the US. In recent years, Ms. Lee has begun to write and illustrate children's books. Some of them deal with the struggles of living with some form of handicap...or, as the author prefers to call it, imperfection. Many of her illustrations have been published and she has earned both academic and public recognition for her important work in children's books. She has had illustrations published in Worldlink Magazine, IEEE Magazine, and several other publications. Sally lives and works in Massachusetts with her cat, Dominic. She has written and illustrated over 30 books for children. Sally Lee writes "My children's books are an extension of my work as a painter. Writing is a new addition for me, and I am enjoying it very much. And creating the illustrations is a perfect way to continue my painting in a new direction and a nice way to complement my writing. I hope to write and illustrate many more". Ms. Lee has won The Pinnacle Book Achievement Award (4 times) and The Family Choice Award (3 times). 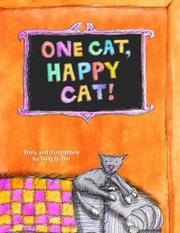 Author-illustrator Lee (Pop! Pop! Bam! Bam!, 2013) follows one cat through his lonely life until his owner arrives in this repetitious picture book for the very young.

A playful gray cat goes through a series of emotions and actions over the course of his day. He hides behind a fire hydrant waiting to pounce on a mouse, showing that he’s hungry. He hides beneath a dresser, expressing fear. An image of an empty chair reveals why the cat is sad. By bathing, drinking and taking a nap, the cat manages to pass the time until, at last, he’s happy in his owner’s arms. The simplistic illustrations aren’t always fully colored, but they’re kid-friendly nonetheless. Some illustrations are stronger than others; the hiding cat looks more anti-social than afraid, and the dressed-up cat (to express the concept of “fancy”) has a strangely shaped face compared to other pictures. But the image of him crawling through a yoga mat (to be “sneaky”) is a perfect representation of how felines can find the oddest places to squish themselves and amuse their owners. Some words may be challenging for newly independent readers but will be great for sounding out with parents (such as “mischievous”); others are excellent examples of action words (“slurping”). The repeated phrase “one cat,” which begins every page, will comfort independent readers by providing a recognizable phrase on each page and encourage lap readers to chime in. The opening synopsis suggests a deeper back story (the cat was a starving stray, and that’s why it begins the story hungry and afraid), but this never quite comes through in the pictures. Instead, young readers will latch onto the emotions, recognizing that they also sometimes feel lonely or afraid or silly.

A comforting book about a cat, likely to appeal to the very young.

"The Girl who was Blue" trailer

The Dog's of Babel

. . . I’m standing on the edge of some crazy cliff. What I have to do, I have to catch everybody if they start to go over the cliff—I mean if they’re running and they don’t look where they’re going I have to come out from somewhere and catch them. Th

The girl who was blue: Pinnacle Book Achievement Award, 2012

This is an alphabet book starring a cute cat with a pink bow. The cat travels through the letters of the alphabet showing images beginning with that letter. It is a great beginner's book to learn the alphabet.
Published: July 7, 2011
ISBN: 1456469088

This is a story about a circle and a square. They are very different. The circle asks the square whether he is still different when he is brushing his teeth or playing ball. They learn to accept and embrace each other as being different. It is also a good bedtime story.
Published: March 12, 3013
ISBN: 1482676850

Drageena, the shy monster, is in desperate need of new shoes. She tries to convince her mother to go to the mall with her to buy her new shoes. Her mother is too busy so Drageena picks flowers, takes a ride in her boat, and visits the insect farm. Her mother finishes her to-do list, and they venture off together to the mall to go shopping.
Published: May 11, 2004
ISBN: 1594575274

Is there a monster over there?

"Is there a monster over there?" tells the story of Mabel (and her cat, Tiffany) who are afraid of monsters. Mabel thinks they are hiding under her bed or in her closet. One day, she decides to face the monster, and she learns an important lesson about overcoming fears.
Published: Feb. 13, 2010
ISBN: 1450531024

We journey with a quiet bunny, Lucy, as she discovers that she cannot hear in one ear. She visits the doctor, eats ice cream with her father, skates, draws, and dresses up for a masquerade ball. She learns that she can live a full life with her disability.
Published: Feb. 17, 2003
ISBN: 1591095646

Lucy and Seymour had plans to go to the circus. But Lucy had a cold so they could not go. What were they going to do? Since Lucy had to stay at home until she was feeling better, she decided to create her own circus. They called it Lucy and Seymour's Circus.
Published: July 25, 2006
ISBN: 1419639862

Lucy realizes that it is Valentine's Day. But she doesn't know how to make a Valentine. So she sets out to learn and makes some wonderful valentines to give to family and friends.
Published: June 21, 2005
ISBN: 141960990

This is a story about Lucy the bunny waking up. It is a good book for children for waking up, brushing their teeth, making the bed, getting ready for the new day. It is like a good morning book, instead of a good night book.
Published: Dec. 20, 2004
ISBN: 1419601105

Lucy loves Halloween. She carves a jack-o-lantern and decorates a trick-or-treat bag while she decides what costume she will make. Lucy thinks about the costumes she has made in past years for Halloween. After much thought, Lucy decides to be a ghost and finds a sheet to make her costume.
Published: Oct. 14, 2003
ISBN: 1594570337

Lucy loves to dance. She dances in the rain, she dances in the snow. She even dances with her teddy bear, Fred. But, Lucy especially likes to dance in her favorite pink dress!
Published: Dec. 20, 2004
ISBN: 1419601083

Magdalena the Bear is in search of the Golden Pear. But first, she is told by a reliable source, that she must learn some simple lessons about life if she is to find it. The Golden Pear holds all the secrets of the universe. She visits her friends, and among them, Edwin the Ant, who does not know the answer to her question. Magdalena continues her search while helping her friends along the way.
Published: June 3, 2004
ISBN: 1594575266

Lucy and Seymour are not ready for bed. So instead they imagine they are on great adventures until they are too tired to stay awake any longer.
Published: July 27, 2007
ISBN: 9781419672385

"No, Never!" tells the story of Daisy the Dalmatian who does not like to do things. She does not like to take out the trash, or clean up her room, or take a bath even. When her mother inquires about what she does want to do, Daisy has bigger plans. Through some gentle reminders, her mother teaches her the importance of small goals as well as bigger goals.
Published: June 9, 2009
ISBN: 1439239088

Peony loved Christmas. It was one of her favorite holidays. She had a long Christmas list, so Peony had to think of many ideas for gifts.

Find your crayons! Find your pencils! Find your markers! Let's color! Fill in the drawings and spell out the words. You can find your own blank paper and think of more words and pictures! A fun book for kids of all ages!
Published: Aug. 15, 2003
ISBN: 1591099455

Clarence loves to steal cakes. He steals them in all shapes and sizes from the other people in the town. What happens when he finally gets caught? Read the book to find out Clarence's fate!
Published: Dec. 21, 2007
ISBN: 9781419683978

A small boy becomes king after his parents are killed in a terrible accident. He does not want to be king and would rather eat carrots and play with his toys. He befriends another boy who is poor and his family has barely anything. The young king learns about the world and its sorrows through his new friend and realizes that he wants to be king.
Published: March 28, 2012
ISBN: 1466469838

This is a story about Harry, the shelter dog, who is entered in a dog show by his owner, Billy, who loves him dearly. There are many other dogs who are entered who are much fancier than Harry. It is a story about fairness and perseverance in following your dreams.
Published: June 29, 2012
ISBN: 1477697667

The girl who was blue

This is a story about a little girl who is always sad. After going to the doctor, she starts to take some medicine that makes her feel better. It is a book to help kids with special problems feel better about their differences.
Published: Dec. 7, 2012
ISBN: 148113910X

Sam dies in a car accident and starts a conversation with God in Heaven. A young couple get involved a a tragic car accident leaving Sam dead. They give birth to a daughter who is deaf who falls in love a college professor.
Published: March 24, 2005
ISBN: 1419605941

Ms. Berry, the ballet teacher, is given a talented group of students. The students do not always do what Ms. Berry instructs them to do. What will Ms. Berry do? A ballet emerges that suits the talents of her students and it is the best ballet ever. It is a story about tolerance, patience, creativity, teamwork, and love.
Published: Sept. 5, 2008
ISBN: 1439209162

At the age of 24, Lucy is diagnosed with Meniere's Disease, a hearing and balance illness that can somtimes lead to total deafness. There is no cure. At the same time, Lucy also discovers God, and begins a lengthy conversation with him about life, love, heartache, and oil paints.
Published: Nov. 17, 2003
ISBN: 1594571260