Samuel Muggington bounced from Dayton, Ohio to California, Arizona, and back to Ohio. After studying science as an undergraduate he spent several years in Africa before returning to attend graduate school. During his academic career he wrote and published stupefyingly boring journal articles until finally coming to his senses in the fresh air of Long Island. He currently writes fiction, both humorous and science fiction/fantasy, when he has not injured himself while working in his garden. 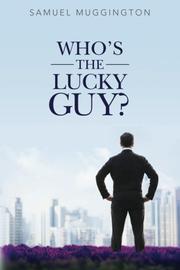 Who's The Lucky Guy?

The same day Borden Duffield loses his Wall Street job, his doctor tells him that he has pancreatic cancer and, at best, a year to live. Wife Helen’s new gig walking dogs won’t pay the mortgage, but Borden gets no response from the hundreds of job applications he’s sent out. When he learns saffron is the world’s most expensive spice, Borden and neighbor/best friend Hill Buckley head to Pennsylvania’s Amish Country for pointers on farming it. He figures if he can make a profitable saffron business, he’ll secure Helen’s future. The Amish trip doesn’t go well, so Borden books a flight to Iran, top producer of saffron. His decision to hide his plan from Helen, however, leads to a misunderstanding (of sorts), and Helen reports her husband kidnapped. By the time Borden returns to the U.S., any saffron-relevant info he’s picked up takes a back seat to the media hounding his door. Things only get more confusing from here once the kidnapping ordeal drags a U.S. government agent, a CIA spy, and Satoshi Nakamoto, the mysterious inventor of the bitcoin, into the Duffields’ lives. Muggington’s novel is chiefly a series of misadventures, amusing scenes involving an inebriated Borden and Hill causing problems, including a kitchen fire. Borden can be boorish at times—he’s unemployed but fully expects Helen to handle the cooking and then complains, even if just to himself, about her culinary skills. Nevertheless, his goal to ensure Helen will be OK after he’s gone is admirable. It’s clear, too, that Borden loves his wife; he’s often in trouble due to excessive drinking, but he’s at least worried that Helen will be mad. The zany story goes in surprising directions, like when Helen suddenly becomes intent on communicating with her canine client, Haggis. She succeeds, a turn that has a humorous connection to the main plot. The ending doesn’t quite answer all the questions—a suitcase mix-up remains a bit perplexing—but Muggington largely resolves the story.

Not the most simpatico protagonist, but continuous mishaps make for a gloriously absurd tale. 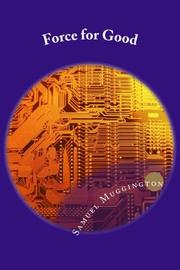 After a young boy is shot and killed, a group of high-school friends wages a digital war against a local gang in Muggington’s (People of the Stones, 2013, etc.) techno-thriller.

A gunshot immediately stops a basketball game in New York City’s Harlem neighborhood, and a young man named Clown is devastated to see that his baby brother, Sam, has been killed. Clown’s friend Mountain holds the disreputable Original Young Gangsters responsible for the murder, and proposes a club, Force for Good, to seek justice. The club, including a brilliant computer hacker named Ordinary, decides to nonviolently retaliate in the only way they know how—by using the Internet as a weapon. Muggington offers a buoyant story that, despite its cruel thugs and occasional murders, reads like a YA novel. This is due to the author’s wise decision to tell the tale from the high-schoolers’ perspective; Mountain, for example, considers school a “waste of time,” and the story portrays all adults as useless, from the basketball coach who doesn’t know his players’ names to the New York mayor who’s so inept that an aide has to pull him away from a cluster of reporters. FFG’s digital vengeance is amusingly optimistic, steering clear of cyber attacks and instead putting OYG members in the public spotlight to diminish their street cred. Although Mountain starts the club, Ordinary drives the narrative; his skills eventually catch the attention of both the cops and the National Security Agency. He even gets the best jokes, as when he scoffs at the supposed “geniuses” at an Apple Store before hacking its electronics; when asked by Mountain to “speak English,” he reiterates the same intricate terminology, only slower. The author sprinkles the story with ironic monikers; for example, Sexpot, a female FFG member, infiltrates the OYG without using sex, and Ordinary is anything but. There are also clever, animal-inspired metaphors, as when Mountain pokes his head out of an elevator “like a groundhog in its earthy home checking for predators” or when scrolling numbers on a computer are compared with “ants scattering from the descending doom of a giant shoe.” The ending, however, wraps things up a little too neatly, and may make readers wish that this brief book was a bit longer.

A surprisingly upbeat thriller with loads of charm.

Things are starting to get odd for botanists and cancer researchers Texie Raynott and Dock Hatman. After an accident lands Texie in the hospital, Dock notices a series of plant-related deaths and stumbles into a bizarre conspiracy. Before long, the scientists are abducted and locked in a huge bunker, deep underneath Manhattan. They’re tormented by a mad botanist, Hildred, who’s created plants that can move, talk, and kill. Hildred is part of a gruesome secret project that’s seeking a way for humans to survive a coming war with plants. Texie and Dock escape and find refuge with the brilliant Bridget Boynton, an inventor who’s also part of another secret plan to escape the plants and colonize Mars. The war explodes just as the Mars shuttles are ready to go. The book then skips ahead 20 years; Texie and Bridget fight despair in an increasingly dysfunctional Mars colony, while Dock navigates a dystopian, dark-ages Earth overrun by genetic mutants and superstition. As the Martian colonists struggle to come back home, Dock returns to his botanical studies. Muggington crams tons of plot points and set pieces into his imaginative storyline, which includes everything from alien life-forms to gigantic aquariums to gladiatorial combat. That said, many characters seem more like plot devices than rational, believable human beings. Several people that Texie and Dock encounter are insane, but even the healthy ones behave strangely, including the cartoonishly fiendish leaders of the Mars colony and the oddly PR-conscious plant experimenters. Even Texie and Dock behave unpredictably; Texie, for example, casually breaks a quarantine, endangering her colony, while Dock responds to the chaos around him with a confused indignation that’s odd in a man who’s managed to survive so long. These characterization and plotting incongruities make the book feel scattered, which is a shame, as the author clearly has a creative story to tell. If he puts more heavy lifting into character and plot development, his next outing could be a truly unique tour de force.

A gonzo but incoherent sci-fi story.

"Go take a flying fuck at a rolling doughnut." from Slaughterhouse-Five by Kurt Vonnegut

Climbing mountains with a ridiculously heavy pack, anything related to science, technology and nature, battling weeds in my garden

People of the Stones

Have you ever seen something odd and just wondered about it? “People of the Stones” is a story that starts out just like that. The year was 1976 and a young traditional African doctor, Musa, sees some curious rock formations in southern Africa. Of course, he just can’t let it go. Along with his best friend James, he starts a wild project to dry and drill into one of the mysterious rock piles Along the way, Musa gives a vivid picture of life in southern Africa along with reflections on traditional African culture. Musa and James don’t neglect the lighter side of life and many hours are spent in contemplation of a variety of local brews. At the same time as Musa and James are starting their explorations; a young African-American woman in New York City named Lakeysha, is having disturbing experiences with some artifacts from Africa. The three of them finally meet in circumstances that defy explanation. The suspense builds and finally the unimaginable happens.
Published: Jan. 22, 2013
ISBN: 9781463001438

On Earth Pomroy lies in a coma with no connection to the life going on around him. In other worlds, however, he’s perfectly conscious—and in terrible danger. Separated from Nna, his young traveling companion, Pomroy finds himself stranded on an asteroid that’s home to the synths, bizarre creatures who metabolize food through the many filaments covering their bodies. As Nna sets out to find Pomroy, she encounters some rather strange traveling companions, including a tiny man, a creature with tentacles that serves as an odd massage therapist, and a sentient plant. She also runs into an old woman who mesmerizes her with tales of the “ageless one,” a being with power to heal or destroy as he sees fit. Meanwhile, back on Earth, the fight for control of the universe heats up as scientists try to rebuild the dark matter device that originally propelled Pomroy into another dimension. Worlds collide as greed overcomes the rules of civilization. Who is the ageless one, really? And what is his intent? Will Pomroy and Nna be separated forever? If answers are to be had, Pomroy, Nna, and their friends must test the known limits of time and space.
Published: March 10, 2015
ISBN: 1507798423

It is only a matter of time and chance before the unthinkable happens. A young boy is hit by a speeding vehicle. The doctors say he will never wake from his coma. No one realizes that Pomroy is now in another strange world. There he meets a beautiful girl named Nna. Nna and Pomroy experience wild adventures and hilarious cross-cultural misunderstandings as they try to survive. Pomroy is torn between his love for the exotic Nna and his desire to go home to his familiar world. Meanwhile, a young physicist and her intern make a fantastic breakthrough. They build a sophisticated dark matter device powered by a quantum computer. Eventually they too are trapped in Pomroy's world. No one knows if the laws of physics will ever let them return.

Mint and Johnny were a cute couple. They loved their life in the East Village. They decided to cruise up to Montreal to celebrate their engagement. One minute was all it took. When their beat-up Camry went through the guardrail in the heart of the Adirondacks, their lives changed forever. Imagine what you would do without your smart phone and techie gadgets, alone in the wilderness. How far would you go to survive?

Dr. Texie Raynott and Dr. Dock Hatman hope to use their expertise in plant biology to discover new cancer drugs. They never imagined that they would end up fighting a global menace that has deadly implications for the future of humankind. While examining a tissue sample, Texie falls and cracks her skull. At the same time, Dock uncovers the truth behind a series of mysterious deaths. Earth’s green plants have turned violent. Someone or something has begun a new war that could wipe out all of humanity. Mother Nature wants to reclaim the Earth, and there is little we can do to stop her. While some choose to stay and fight, others elect to establish a new home on another planet. As Texie makes an astounding discovery on Mars, Dock tries to stop the conflict that is ravaging Earth. Samuel Muggington’s science fiction adventure takes readers from the brink of humanity’s collapse to the struggles of a newly colonized planet and beyond. His work shows both the fragility and savagery of the natural world and will inspire readers to look more closely at their impact on the Earth’s ecosystems.
Published: Dec. 7, 2016