Northern Illinois near the Wisconsin border, although a peaceful environment, can be a bit claustrophobic. Especially since the lazy quiet of watching wrens nest followed a fast track existence of sushi bars, hotel rooms, breakfast meetings, and deliverable deadlines.

I turned on my lounge-lizard piano solos and contemplated a character staring at a Ferris wheel, another character running through a cemetery during a thunderstorm, and yet another haunted by the sound of a clock chime.

Hours of research, notes, and writing slipped by and suddenly Yesterday was born. The novel was a nine-month effort that I’ve enjoyed immensely.

I now live in Chicago, walking distance to Oak Street Beach and Lincoln Park. I’m again contemplating characters, working on my second novel, What Goes Around.

From my living room window, the sparkling lights of Chicago are a wondrous inspiration. I’m sipping a glass of Merlot, looking at a light in the distance, and wondering …

“The chief strength of Samyann’s work is, besides its historical breadth, its unabashed romanticism—she cheerleads, without a hint of irony or cynicism, a kind of cosmic metaphysic of love that only the most jaded won’t find tenderly endearing.”
– Kirkus Reviews 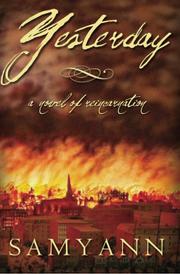 In this debut romance, a couple trace their twin destinies back to former lives during the Civil War.

Amanda Parker was definitely not on the hunt for love—after losing both parents to an automobile accident and her brother to a boating catastrophe, she learned that her fiance suddenly died in a plane crash. But then she saves the life of a handsome police officer, Mark Callahan, and she’s not only magnetically drawn to him, but also inexplicably believes that she knows him somehow. The same peculiar feeling haunts Mark, who muses at one point: “This is Twilight Zone stuff. Can there be some sort of history between us? Were we lovers once?” Intrigued by their nebulous bond, they turn to Amanda’s godmother, Mary, for help—she’s an accomplished psychologist practiced in the art of past life therapy. With Mary’s guidance, Amanda is transported first back to her own childhood, and then to what appears to be a prior existence as a little girl named Bonnie in a South roiled by the Civil War. The tale chronicles Bonnie’s experiences growing up under the supervision of a slave, Magdalene, a woman she loves like a mother, and the way in which her perilous existence intersects with Mark’s prior incarnation. Samyann’s story is breathtakingly ambitious—she essentially constructs two seamlessly braided novels that dramatically depict metempsychosis, a love story, and the terrible wages of the Civil War. She suggestively intimates that a person’s emotional constitution is the sum result of the soul’s long historical pedigree, an accumulation of experiences that reaches back far in time. The novel flourishes most when the subject matter is the Civil War—the author artfully depicts its moral complications with scrupulous nuance, and the dangers those years posed to blacks and whites alike. But Samyann’s writing strains with too much transparent effort to elicit emotions, and as a result the romantic story devolves into overwrought melodrama. The prose itself can be overdone to the point of absurdity: Mark’s “gentle baritone seemed to evoke an ancient Celtic breeze.” What kind of breeze is both ancient and Celtic? But even more distracting is the author’s inclination to supply too much commentary, simultaneously telling the tale and explaining it to readers. She discloses her characters’ thoughts by representing their inner monologues in italicized speech, a heavy-handed approach that seems to assume readers’ persistent incomprehension. Early on, Amanda muses: “Hope he doesn’t take this invitation to dinner wrong, but he’s been so persistent. I’m not leading him on, am I? No. I’ve been nice, nothing more, polite. He can’t be misinterpreting this.” The chief strength of Samyann’s work is, besides its historical breadth, its unabashed romanticism—she cheerleads, without a hint of irony or cynicism, a kind of cosmic metaphysic of love that only the most jaded won’t find tenderly endearing. Unfortunately, that same romanticism easily inclines toward its corresponding vice, treacly sentimentality.