I was born in Mauritius where the Dodo lived and was exterminated. My ancestors were immigrants from Bihar, India.
As Mauritius was a British colony- it is now independent- we had a strange educational journey which was broadly based on the British model, but through the medium of French. We tend to be at least bi-lingual.
I did very badly at school, but managed to acquire the minimum High School grades which enabled me to go to university. I studied in Manchester and Cambridge universities, ending with a bachelor and a master’s in mathematics ans statistics, which led to interesting positions in academia in Congo (Zaire), Nigeria, Algeria and also the United Kingdom.
I started writing at the age of 10 (for the Scouts’ magazine).
I have explored most genres, but drama and fiction have been my main interests. As a dramaturg I won a prestigious Mobil prize for playwriting. I have had plays performed on stage, in London, Edinburgh and Dublin, as well as on BBC Radio.
I published the Irene Adler Trilogy on Create Space. My “big” novel on immigration (“4 continents, 4 centuries”), Magnetite, is undergoing final touches for publication in the new year (2016).
My interests, apart from the usual writer’s menu of reading and travelling, are the Cinema. I love Japanese and Iranian films.
I am married and have two (grown-up) sons. I live in Edinburgh. 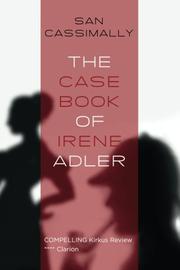 THE CASE BOOK OF IRENE ADLER

The sharp-witted actress who earned Sherlock Holmes’ admiration offers her own recollections in this first installment of a Conan Doyle–inspired series.

Irene Adler begins her “case book” by describing how she disguises herself as a frumpy older woman to become Holmes’ housekeeper. He appears to buy her masquerade, although when he’s high on cocaine, he calls her by her real name. Irene then circles back to describe how she has, after “patchy if unspectacular success” as an actress, joined a bohemian group of justice-seeking avengers self-dubbed the Club des As, after an aristocratic lover swiped a beloved brooch. She proceeds to recount the group’s adventures, which are largely focused on righting society’s wrongs or at least puncturing its pretensions: kidnapping racists to teach them a lesson; forging a Millais painting, which fools even Holmes; and switching out letters being used against an Oscar Wilde–type club member, a scam that Holmes at least partially unravels. Irene’s account culminates with her perspective on the King of Bohemia case (where she first appeared in Doyle’s fiction), which reveals why she became Holmes’ housekeeper and battled Professor Moriarty with him at Reichenbach Falls. Edinburgh-based Cassimally has created a fun, feminist twist on the Holmes canon, fleshing out a character who was only briefly mentioned yet, in Doyle’s “A Scandal in Bohemia,” received the ultimate accolade: “To Sherlock Holmes she is always the woman.” Irene provides wonderfully acerbic observances on a host of topics, particularly on Holmes himself: for instance, “I discovered that he had no ear for irony.” Occasionally, her libertinelike persona is a bit disturbing, however, as when she falls in love—or at least lust—with a child murderer. More problematic is the narrative’s episodic, somewhat chronologically confused construction, which gets a bit bogged down with some less-than-stellar cases and may displease readers looking for a more linear path to solving the Irene/Holmes relationship. Still, the showdown at Reichenbach Falls is worth the wait, serving as a powerful cliffhanger and launchpad for The Memoirs of Irene Adler, the already published second book of the series.

Compelling if at times convoluted “herstory” of Holmes’ famous woman. 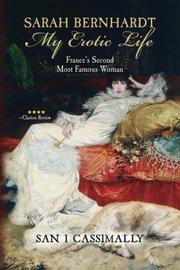 Cassimally (The Memoirs of Irene Adler, 2013, etc.) pens a fictionalized autobiography of the famed French actress.
In Cassimally’s version of Bernhardt’s life, she was born in mid-1800s France, the daughter of a courtesan and an unknown father. She was a Jew who wanted to be a nun, though her mother wished otherwise. Bernhardt was determined: “I was not going to make a living on my back”; but for a time, she did. She was a timid teen, convinced her first sexual experience would be her last. Her mother capitalized on her virginity—“what has been broken can be fixed”—and Bernhardt was thus visited by a woman named Madame Aglaë, who specialized in “revirginification.” Luckily, Bernhardt met a young man who boosted her self-esteem and stirred her passion. After garnering a contract with the Comédie-Française, a theater in Paris, she hoped for a career as an actress but was dismissed after slapping another performer. Eventually, she returned to the stage and found acclaim; she also slept in a coffin, was an accomplished sculptor, endured the amputation of a leg and was touted as “La Divine Sarah.” She crossed paths with celebrities of her time, including Bertie, Prince of Wales; Marcel Proust; Victor Hugo; and even Mary Lincoln. Presumably a fictionalized memoir without footnotes or sources, the book begins well, with Bernhardt’s thrice-lost virginity (thus the chapter title “How I Lost My Cherry, My Cherry, My Cherry”). Her amorous adventures are varied, with references to her “semi-lunes” (breasts) and her giving, and being given, a “pipe” (“tongue job”). Often accompanying the sexual acts are lovers’ emotional admissions, which tend to be more interesting than the relatively tame technicalities of sex. Bernhardt connects with individuals across the spectrum of society: Oscar Wilde (she told him she would cure him of his homosexuality, and he allegedly wrote Salome for her); the war-wounded men she tended, who were close to death yet capable of an erection; and even a Creole alleged murderer. There’s voice—a chatty tone prevails—but little depth. Ultimately, this is a series of scenes of Bernhardt’s many assignations interspersed with quotes, conversations and opinions.

At times spirited vignettes that eventually run out of steam. 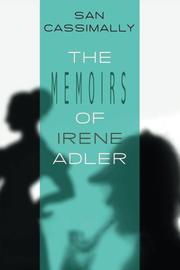 The Memoirs of Irene Adler

Edinburgh-based Cassimally (The Case Book of Irene Adler, 2013) brings back the unconventional female who famously impressed Sherlock Holmes for the second installment of a series.

Actress Irene Adler has returned to London following her getaway trip to Australia after the showdown between Holmes and his archenemy, Professor Moriarty, at Reichenbach Falls. Sadly, at least from her point of view, while the sleuth joined her for a spell, he never acted on their sexual attraction. Still, now that they’re both back in London, Holmes offers sage advice about her investigation agency: Use her cross-dressing skills and operate it as a man. Adler decides to try to take his advice, and Cassimally launches into a series of separate-chapter stories of cases and capers. She gets involved in the treason trial of a friend of Lord Clarihoe, her marriage-in-name-only gay husband known as Algie. With the help of her crew of justice-seeking friends, dubbed the Club des As, Irene pulls off a Robin Hood move to help a struggling merchant, a drug-addled Holmes concerned that he committed the crime. When a baby is abducted, all fear the worst, leading Irene to engage in harsh interrogation methods. Other incidents involve foiling an attempt to assassinate the future prime minister Lloyd George, conducting a heist on a bank that Holmes deemed “unassailable,” uncovering cannibalism, and aiding a woman even more libertine than the narrator of these tales. Cassimally’s Irene is a coolly sardonic observer of Victorian hypocrisy and corruption, vibrantly depicted in her stories. She also embraces then-emerging Freudian psychology and is open-minded about sexuality, with her bond with Oscar Wilde–like Algie both believable and touching. Irene’s interactions with Holmes, however, get a bit muddled. Having the two survive Reichenbach Falls together was an inspired idea, but these tales tend to jump around and include some rather underdeveloped and digressive check-ins about Holmes, making it challenging for readers to track the chronological trajectory of this intriguing relationship.

Cassimally (The Case of Irene Adler, 2014, etc.) offers a novel set across 400 years on four continents, featuring a wide variety of characters.

In present-day Scotland, a bright young woman named Katrina Crialese is on a cycling trip. In the past, she helped a professor study the flight patterns of starlings, so when she crosses paths with Donald Robertson, a stammering young man who’s about to work on a bird migration project, the two seem nearly made for each other. As he seeks to explore the land of his forebears, readers will suspect that the two are headed for some sort of love connection. But when Donald settles down for an evening of conversation with a Scottish bus driver and storyteller, the story takes a sharp turn to late 18th-century India. In “Allapur, the loveliest little gaon in the Gaya district of Bihar,” Parsad is a young farmer who once dreamed of becoming a teacher. After the death of his wife, he decides along with his friend Sukhedo to make a move to Calcutta. Meanwhile, in Inhambane, Mozambique, fear spreads that slave ships have been sighted. One tribal leader “was known to be in league with the slave-traders, and he quite shamelessly sold his own people to them.” So how will the others maintain their safety? As the novel progresses, it explores and interrelates the lives of the aforementioned characters and many, many others. The drastic jumps between times and places (including 18th-century Canada and 19th-century Tasmania) can be disconcerting. However, engaged readers will find plenty of worthwhile details; for example, at one point, the author provides information on the preparation and popularity of sojne data (“Cooked with oil, onions, garlic, haldi, and chillies, it was a very tasty dish and even rich folks liked it”). Other descriptions, though, such as that of the construction of a canal in the Scottish Highlands, can come across as overdrawn.

A highly ambitious book that takes a whirlwind, if occasionally disjointed, journey through connections of the past.

"The strings my lord are false" Shakespeare, Julius Caesar

The Adventures of Irene Adler

Collection of stories involving Irene Adler and Sherlock Holmes, sometimes working together, sometimes against each other.
Published: Sept. 8, 2014
ISBN: 1503189856