Sanjyot has written fifteen business books and Maddie & Sayara is her first young adult fiction title. Maddie & Sayara tells the tale of two girls who find that their lives go down different paths just because of where they were born. Join them on their adventure as they challenge unfair rules and try to escape from dangerous and powerful forces. In 2018, Maddie & Sayara will expand to additional titles and related content for markets around the world.

Sanjyot P. Dunung has spent years mentoring young women from all kinds of backgrounds around the world. Her mission with this book is to inspire young people to overcome the cultural and structural barriers that prevent them from achieving their ambitions.

Sanjyot is president and founder of Atma Global, a leading-edge developer of innovative global learning content and solutions, focusing on countries, cultures, and global business topics. Sanjyot is a recognized leader in the field of cross-cultural learning and has extensive experience in developing innovative multimedia learning and content solutions. Sanjyot also periodically authors articles on doing business internationally and entrepreneurship. Further, she has appeared on CNBC-TV, CNN International, Bloomberg TV, and various radio programs and is often a guest speaker at conferences and seminars addressing international business, global cultures, entrepreneurship, and women in business.

Sanjyot works to promote equality of opportunity by working closely with global not-for-profits, serving on Boards, and by mentoring young people around the world.

“A spunky 13-year-old girl challenges the sexist laws of another country in this middle-grade novel of girl power and social justice. Maddie is an enjoyable and bright first-person narrator with a voice that's imbued with all the attitude and passion of a teenage girl... the escalating drama and Maddie's energetic narration will keep readers turning pages.”
– Kirkus Reviews 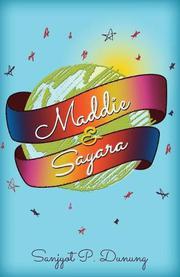 A spunky 13-year-old girl challenges the sexist laws of another country in this middle-grade novel of girl power and social justice.

Maddie is on vacation in the Bahamas when she first meets Sayara. They have several things in common: they’re the same age; they both find their little brothers annoying; and they both have doting nannies. Their friendship is cut short, though, when Sayara must return to the unnamed kingdom where she lives, because her beloved cousin Themi has been arrested for driving while female. Maddie is incensed at this and a host of other unfair laws that Sayara must deal with. She vows to go to any lengths to help her friend—even if it means using her mother’s airline miles to book a ticket to the kingdom. On her flight, she meets Alisha, a native of the kingdom who left because of the oppressive societal strictures. She lends Maddie a garment called a “tent,” which all women are required to wear. When Maddie arrives at the kingdom, the “FP,” or Faith Police, are angry that she doesn’t have a man accompanying her; Alisha’s husband swoops in to help, and the family takes Maddie in. Soon her mission to help Sayara is revealed, and despite the risks, Alisha and her family agree to help. Overall, Maddie is an enjoyable and bright first-person narrator with a voice that’s imbued with all the attitude and passion of an authentic teenage girl. It’s also a pleasure to encounter the many grown-ups in her life who inspire her, from her independent Aunt AK (“I’ve always wanted to be like her,” Maddie says. “She’s not only pretty on the outside, but really kind on the inside”) to her forgiving father and Alisha’s wise parents. Some of the dialogue about the injustices in the kingdom is heavy-handed; for example, Themi’s impassioned speech about the unfair laws goes on for more than five pages. But despite the unsubtle messaging, the escalating drama and Maddie’s energetic narration will keep readers turning pages.

A mostly engaging story of sticking up for one’s own beliefs, aimed at young readers interested in questions of social justice.

Sayara reflected. I could hear tears in her voice. "We may have all the treasures of the world, but we do not have the ones most valuable - freedom, equality, and respect. Those you have in abundance, Maddie."