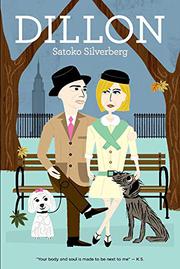 A debut novel in which an Upper East Side widow grows to love a scruffy dog from the pound.

In 2012, Miriam Day is a woman who exudes a “quiet and elegant” glamour. Her successful but philandering husband, Herbert, recently died, and Miriam dreams of fabulous European cruises in her future, but her adult children have other ideas. (The sharp-tongued Miriam is never one to seek refuge in family, often saying things like “Children are good for the most part, but too much is no good.”) Her stubborn, 41-year-old daughter, Rose, and loving, older son, Jason, show up for Miriam’s 70th birthday with a surprise: an aging rescue dog that Miriam describes as resembling “an oversized rat.” Soon, however, the older woman softens. She hires a dog walker, rubs elbows with the “snooty” poodle owners in her neighborhood, and even gives the dog a name: Dillon. She finds herself growing attached to the pooch, who reminds her of Henry, the love of her life who tragically died before her move to New York City from Texas County, Oklahoma, 50 years ago. Dillon bonds with Miriam, protecting her at every opportunity—even going so far as to bite a flirtatious gentleman in the park. That man, Hugh Fanning, turns out to be an influential businessman who embroils the family in a legal battle over Dillon’s fate, leading to a “Save Dillon” campaign that creates buzz in New York. Silverberg’s debut hits the same bittersweet notes that endear other animal-centric books, such as John Grogan’s 2005 memoir Marley & Me, to readers. However, she offers something special in Miriam, who has an appealing blend of toughness and vulnerability. The dialogue between Miriam and her adult children is a well-constructed delight; in one hilarious scene, for instance, she both horrifies and impresses them with frank sex talk. Silverberg also pays special attention to setting, painting the change of seasons in New York and the stiff atmosphere of the Upper East Side, in particular, to perfection. A last-minute, unexpected twist seems intended to tie the book’s plot threads together, but it unfortunately feels out of place.

A pleasant story for dog lovers with a captivating setting and charismatic lead.

A Story of Polina Sokolov

A Russian orphan enlists as a government agent during the height of glasnost in the Soviet Union, is mired in a forbidden liaison and later seeks fulfillment at a deep terrain of punishing mountains in far away war-torn Africa. Dangerous, dark and wrenching.

It is the glory days of stretch limousines on the street of New York, the 1980s. A naive recent college graduate lands on a job as a limousine driver and soon is thrust into the world of hoodlums. Meant to be a quick education designed by his lawyer father, the initiation to the outrageous characters lures him deeper into the city’s underbelly. Scenes in the rear-view mirror are unheard-of, funny and sad.

A gifted writer, still unpublished, learns his champion, his out-of-the-ordinary father has a terminal illness as he struggles to finally complete the novel, the story about a Russian orphan enlisted as a government agent during the height of glasnost in the Soviet Union. The father and son, each tries to reconcile himself to the end to the saga of his own. A story within a story explores the natural human instinct of survival.