Scott Mason first learned about haiku poetry on a hiking trip in Japan. Since 2002 he has won over 150 English-language haiku awards, including the top prize in more than twenty blind-judged international competitions—possibly the record for any Western haiku poet. As well as placing first in the annual contests sponsored by the national haiku societies of the United States, Canada (3x), Ireland (2x) and Great Britain (5x), Scott has won the three most prestigious English-language haiku competitions based in Japan. In 2007 he was flown to Kumamoto, Japan to accept the International “Kusamakura” Haiku Award. In November 2014 he served as a literary Artist-in-Residence at the Studios of Key West.

Since 2011 Scott has volunteered as an editor with the haiku journal The Heron’s Nest. He also serves on the executive committee of the Katonah Poetry Series, now in its fifty-first year, near his home in northern Westchester County, New York.

Scott has given talks and conducted workshops at assorted haiku gatherings across the United States. In September, 2017 he delivered a keynote address at the biennial Haiku North America conference, in Santa Fe, New Mexico. Closer to home he has taught “The Art of Reading and Writing Haiku” at the Hudson Valley Writers’ Center in Sleepy Hollow, NY.

At Haiku North America in 2017 Scott introduced The Wonder Code: Discover the Way of Haiku and See the World with New Eyes. It has since been awarded both of the top English-language haiku book prizes: the Touchstone Distinguished Books Award from The Haiku Foundation and the Merit Book Award (prose category) from the Haiku Society of America. It has also received the Kirkus Star.

Scott is a marketing consultant and a graduate of Dartmouth College and Harvard Business School.

“Debut editor Mason includes nearly 500 poems in this sparkling anthology, showcasing the extraordinary versatility of moods and subject matter haiku can address and the vividness of its stripped-down but potent imagery. ... A superb haiku collection for readers who thought they didn't like poetry, richly expressive and very accessible.”
– Kirkus Reviews 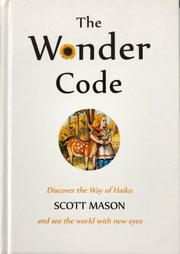 The winsome Japanese verse form can restore a sense of delight and creative adventure to jaded hearts, according to this poetry primer and anthology.

Mason, a poet and editor of the online journal The Heron’s Nest, offers haiku as a cure for “the subtle ways in which our culture and times estrange us from wonder.” It’s a popular form because of its friendliness to poets and readers alike: three brief lines (or occasionally two or even one), with no confining rhyme schemes or meters. (The iconic 5, 7, 5 syllable pattern can be broken at will.) The resulting bite-size poems go down easily, but, the author argues, they pack great power within their diminutive expanse. He discusses haiku in the framework of Zen aesthetics, illustrating with poems gleaned from The Heron's Nest. Haiku portrays the Buddhist principles of focusing on the ordinary and small-scale (“last night’s rain / cupped in a banana leaf / a small green frog” by Ferris Gilli) and finding a world in a grain of sand (“city sidewalk / colors swirl in a bubble / of spit” by Brenda J. Gannam). They capture life through rapt sense impressions (“autumn evening / the clink of carnival rings / on empty bottles” by Chad Lee Robinson). Evanescent and usually in present tense, they abide in the moment and evoke large meanings from concentrated images (“in the rest home lounge / the silent piano / its line of cracked keys” by John Hawkhead). And they traffic in everyday mysteries (“soap bubbles / how softly mother / bursts into laughter” by Kala Ramesh). Mason situates haiku in opposition to a Western mindset that perceives objects as discrete and atomized. Haiku, by contrast, flows from a holistic Eastern worldview that sees everything as connected, in which “our perception of boundaries…starts to give way.” Debut editor Mason includes nearly 500 poems in this sparkling anthology, showcasing the extraordinary versatility of moods and subject matter haiku can address and the vividness of its stripped-down but potent imagery. There are many landscapes and nature scenes (“winter hills / with each boot crunch / the scent of sage” by Jo Balistreri) as well as lyrically grungy urban tableaux (“dumpster / the iridescence / of starlings” by Bill Kenney) and suburban nightmares (“suburban darkness / only the rumble / of garbage can wheels” by Robert Forsythe). There is sensual intimacy (“click-clack / of the bead curtain— / the sway of her hips” by Sandra Simpson) and social satire (“singing gondolier / the passengers’ / fixed smiles” by Kay Grimnes). There is birth (“circle of lamplight— / I complete the baby quilt / begun for me” by Carolyn Hall), aging (“sudden winter / the press of cold metal / against the paper gown” by Beverly Acuff Momoi), unbearable sorrow (“hot afternoon / the squeak of my hands / on my daughter’s coffin” by Lenard D. Moore), remembrance (“her last words / snow falling / on beech leaves” by Jeff Hoagland), and enigmatic hope (“she said she’d return / as a seagull / which one” by Mason).

A superb haiku collection for readers who thought they didn’t like poetry, richly expressive and very accessible.

THE WONDER CODE: DISCOVER THE WAY OF HAIKU AND SEE THE WORLD WITH NEW EYES: Kirkus Star

THE WONDER CODE: DISCOVER THE WAY OF HAIKU AND SEE THE WORLD WITH NEW EYES: Named to Kirkus Reviews' Best Books, 2019

THE WONDER CODE: DISCOVER THE WAY OF HAIKU AND SEE THE WORLD WITH NEW EYES: Touchstone Distinguished Books Award (The Haiku Foundation), 2018

THE WONDER CODE: DISCOVER THE WAY OF HAIKU AND SEE THE WORLD WITH NEW EYES: Merit Book Award (Haiku Society of America), 2018