After a twenty-five-year career as a medical professional, debut novelist S.E. Valenti's dream of changing her career path to professional writer has finally been realized with the publication of "Deliver Us from Honor, Part I: Sicily" (Koehler Books, 2015). Much of Valenti's experience and knowledge of Sicily and her people comes from having been married to her 2nd generation Sicilian husband for over thirty years. Together they spent many years visiting his beloved homeland soaking up the culture, charm, and distinctive nuances of his Sicilian heritage.

“Valenti excels in provoding her characters with insurmountable situations, plenty of action, and rich dialogue. A family saga of betrayal, brutality, and Sicilian honor.”
– Kirkus Reviews 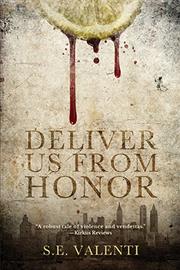 Deliver Us From Honor

A family saga of betrayal, brutality, and Sicilian honor.

Sicily in the spring of 1911 is a dangerous place and time for the Vazanno family, the prime players in this debut novel. “Get the horses. I’ll get the shotguns!” Sevario Vazanno shouts when he and Santo Padua see smoke coming from the farm owned by Sevario’s brother Giuseppe. Discovering that Giuseppe and his wife are missing and their animals are burned to death, Sevario is relieved to discover the couple’s two daughters, Adriana, 16, and her little sister, Francesca, hiding in a tunnel below the family’s property. But the joy of finding the sisters is soon shattered when Sevario discovers the body of his other brother, Gaspano, shot to death on his nearby farm. Who committed these heinous crimes is a puzzle, and Adriana silently holds the key. The story flashes back several months to her rape by Turiddu Vanucci, son of her father’s dear friend Vito. She keeps the act a secret from nearly everyone—especially her father, Giuseppe. But when his wife, Maria, discovers who violated their daughter, she engages her son in a vendetta. “It has to be you, Antonio,” she tells him. Antonio, who is studying for the priesthood, is horrified by his mother’s unholy request, but his omertà “culture demanded it…and he knew he had to accept it.” Valenti excels in providing her characters with seemingly insurmountable situations, plenty of action, and rich dialogue. There is, however, an overabundance of characters, and the inclusion of a family tree would have been helpful. For example, it is confusing as to who Santo Padua is: on the first page, he is identified as Sevario’s brother, but later, Sevario’s niece Adriana and Santa “were not natural siblings, as he had been adopted.” Also, too often characters cry or feel tears coming to their eyes—not that the Vazannos don’t have reason to wail with all the drama they encounter.

A robust tale of violence and vendettas.

"The Hour I First Believed", "I know This Much is True" by Lamb and "World Without End" by Follett ; "The Godfather"

"I'll Make Him an Offer He Can't Refuse."

"capisci?" Italian for "Do you understand?"

Telling a story that keeps people so enthralled they can't put the book down...

My family, friends, and telling a really good story!