For his first novel 'Neon Phantoms', McCloy stuck to what he knows best - combining a love of cinema with an intimate knowledge of dead end jobs. His second novel, 'The Man Who Knew Too Much Hitchcock', is a tale of madness, movies and multiple murder. In his spare time he enjoys drinking coffee from branded mugs and referring to himself in the third person.

“An exciting debut that will provide hours of entertainment for both aspiring film buffs and cinematic masters.”
– Kirkus Reviews 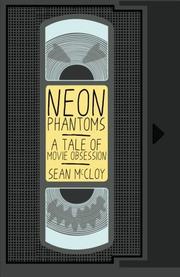 A rare slasher film takes over a video store manager’s life in this cinematic suspense novel.

McCloy’s debut introduces Hal Underwood, a lonely, movie-obsessed, underachieving manager of an aging video emporium, and tracks his descent into unhinged madness after he finds a copy of a horror film called The Jack-o-Lantern Man. He recovers the videotape at a mysterious store called Leandro’s, a veritable cave of wonders for the true movie buff. In the grip of anomie and still hurting from a breakup, Hal decides to pop in the tape for entertainment. The 1970s horror flick tells its story through the eyes of a killer who wears a carved jack-o’-lantern on his head and leaves bloody handprints as a calling card. The film, much like this novel, brims with esoteric allusions to film history, which leads Hal down a rabbit hole in search of answers. He stumbles across a fan website devoted to the movie’s all-but-forgotten director—one Giacomo Nero, whose creepy biography and on-set journals McCloy reproduces in the text. More unsettling, though, is a series of dreams that overtake Hal’s life, in which he acts out scenes from the film, has liaisons with a gorgeous customer who loves the films of French director Éric Rohmer, and encounters weird archetypal figures, such as the “Divine Projectionist.” The novel’s constant cinematic references probably won’t appeal to readers who don’t already have an abiding love of film. Even some movie buffs may feel that some references are mere name-dropping (“Thanks for the pep talk, Malcolm. You been watching Glengarry Glen Ross again?”). However, McCloy’s literary technique sets this work apart, as it includes overlapping texts, fragments, intra-textual screenplays, and diary entries. He uses these inner texts to develop suspense, suspend readers’ disbelief, and show characters from many angles. Overall, it leaves readers with a strong sense of story while simultaneously communicating a sense of authorial playfulness. This is Pynchonian Cronenberg, or Lynchian Hornby—fun and horrific, and campy but engaging.

An exciting debut that will provide hours of entertainment for both aspiring film buffs and cinematic masters.

'The Fan Man' by William Kotzwinkle

The Man Who Knew Too Much Hitchcock

"In my films, characters have been strangled… stabbed… shot… they have plummeted from great heights… been bludgeoned… slowly poisoned… they have been blown up… asphyxiated by gas and pecked to ribbons by birds. I plead guilty to all these deaths. So what is my greatest legacy? Murder." Alfred Hitchcock delivers these words to a youthful, obsessive fan on the set of his film Frenzy. But, in the aftermath of this fateful meeting, why do certain people in the young fan’s life seem to develop a habit of dying in ways that could have been lifted from a Hitchcock movie? Why, decades later, is he writing his confessions from inside a prison cell? Who is The Avenger and what do his victims do to provoke his wrath? For the answers to these and other Hitchcockian questions, take a journey into the dark and twisted mind of 'The Man Who Knew Too Much Hitchcock', a tale of madness, movies and multiple murder.
Published: Sept. 10, 2017
ISBN: 1547079096