Sean D. Sammon, FMS currently holds an appointment as Scholar in Residence at Marist College in Poughkeepsie, New York. He is a membe of the Marist Brothers, a Roman Catholic religious order, and a licensed clinical psychologist in the State of New York.

“A familiar but useful guide for embracing aging.”
– Kirkus Reviews 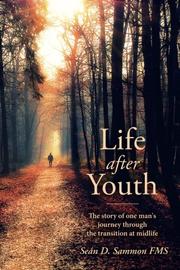 A philosophical and theological treatise discussing the emotional upheavals experienced during the transition into middle age and the joys to be discovered if the transition is understood and appreciated.

Sammon (A Heart That Knew No Bounds, 2013, etc.), who first published this volume in 1997, has released a newly edited edition “at the request of a new generation of midlife readers.” In 1994, at the age of 47, Sammon was diagnosed with a benign brain tumor that required surgery. The treatment was successful, but the experience inspired him to reflect on and eventually write about his personal journey into middle age—the physical and emotional changes as well as the opportunities for a greater understanding of self. Sammon is a member of the clergy, a Marist Brother, and so this exploration also includes a reevaluation of his relationship with God. It’s the transitional period itself that primarily concerns Sammon, those years when “time starts to pinch. We sense that we have crossed a threshold and begin to realize that probably more time lies behind us than stretches ahead.” He defines middle age as between 40 and 65, to be followed by “late and late, late adulthood,” which have their own periods of transition. Much of this territory is well-trod, but Sammon’s clear prose and wry humor (“And let’s be honest: when the leg muscles of an eighteen-year-old boy fire, he takes off like an antelope; when a man of forty-five tries to do the same, he tears his Achilles tendon”) make this short text accessible and pleasant. Don’t look back at what is lost when aging, Sammon urges. Rather, turn forward joyfully to the adventure of becoming the more knowledgeable, more compassionate, more loving individual that will define you as you travel through life’s second half.

Not just for the religious; a familiar but useful guide for embracing aging.