Selene dePackh is a multiply-disabled graphic designer, diagnosed as autistic late in life. She's dabbled in sexwork and employment in offices; she's learned sexwork pays better, and the buyer doesn't demand as much. Now that winter's come, she's turned back to words to pursue her first love, storytelling.
Tom Sweterlitsch, author of The Gone World and Tomorrow and Tomorrow, says of her first novel and its narrator: "Troubleshooting is harrowing, yet beautiful, a science-fiction dystopia that articulates the often tragic conditions of our present. Her character ‘Scope’ Archer is complex and endlessly intriguing. A stunning literary debut.”
She says of her writing, “I’ve spent most of my life working with images. Words aren’t considered the tools of autistics; we're assumed to 'think in pictures.' I bring a lifetime of design-craft to creating narrative. My work has always been a Grand Guignol koan in one form or other. My father was a nuclear physicist, and I learned from him the relentless hunt for the true expression that both shatters and confirms understanding."

“...a character of immense depth and originality. There are few protagonists in sci-fi—or literature in general—that present an autistic perspective with such specificity and pathos. The explorations of ableism and sexuality in a claustrophobic cyberpunk setting make this unlike anything most readers will have encountered before. Though the universe dePackh creates is vast (and terrifyingly believable), this series opener is focused and highly intimate. Readers should welcome the next installments. A gripping, lyrical, and ambitious dystopian novel.”
– Kirkus Reviews 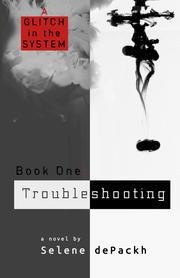 A sci-fi debut tells the story of an autistic teen’s struggles to survive her institutionalization.

In a not-so-distant future when the United States has broken into autonomous regions and disabled people have lost their civil rights, 15-year-old Sophia “Scope” Archer is confined to the Thunderbird Mountain “development center” for troubled teens in “the drilled-out, logging-stripped, mining-gouged backcountry of Wyandot County.” Scope is a high-functioning autistic teen, her condition marked by the blue puzzle-piece tattoo on her wrist that dictates how the authorities treat her. At Thunderbird Mountain she meets Chill Dark, a gay prostitute marked with the sociopath tattoo, who possesses a keen interest in post-colonial theory and turns out to be a crack shot with a firearm. A legal adult, Chill no longer has to live at Thunderbird, though he visits Scope and his half sister Angela, smuggling in supplies. Scope must find patrons on the inside as well, navigating the corrupt and sexually violent guards on the one hand and the dehumanizing medical treatments on the other. Scope finds a way to use her domineering sexuality to her advantage, but when the opportunity arises to exploit Chill’s criminal connections to escape her prison, she will risk everything for a chance to regain the freedom that was stolen from her. DePackh’s prose is dense and stylish, demonstrating an eye for both the grittiness of her setting and the sensuality that her characters manage to find within it: “Where he looked like he ate once every day or two if he remembered, she wore her appetites on her thick, strong body like the firm curvature of willful craving.” Scope is a character of immense depth and originality. There are few protagonists in sci-fi—or literature in general—that present an autistic perspective with such specificity and pathos. The explorations of ableism and sexuality in a claustrophobic cyberpunk setting make this unlike anything most readers will have encountered before. Though the universe dePackh creates is vast (and terrifyingly believable), this series opener is focused and highly intimate. Readers should welcome the next installments.

Some non-exclusive synthesis of Raymond Chandler and Angela Carter

usually the most recent one

"There is some shit I will not eat." e.e. cummings

pulling up things by the roots

~bn Book Review • Troubleshooting: Glitch in the System: Book One by Selene dePackh, 2018