Sergio Troncoso is the author of A PECULIAR KIND OF IMMIGRANT'S SON, THE LAST TORTILLA AND OTHER STORIES, CROSSING BORDERS: PERSONAL ESSAYS, and the novels THE NATURE OF TRUTH and FROM THIS WICKED PATCH OF DUST; and as editor, NEPANTLA FAMILIAS: AN ANTHOLOGY OF MEXICAN AMERICAN LITERATURE ON FAMILIES IN BETWEEN WORLDS and OUR LOST BORDER: ESSAYS ON LIFE AMID THE NARCO-VIOLENCE. NOBODY'S PILGRIMS: A NOVEL is forthcoming in 2022. Among the numerous awards he has won are the Kay Cattarulla Award for Best Short Story, Premio Aztlan Literary Prize, International Latino Book Award for Best Collection of Short Stories, Southwest Book Award, Bronze Award for Essays from ForeWord Reviews, and the Silver and Bronze Awards for Multicultural Fiction from ForeWord Reviews.

Troncoso has taught at the Yale Writers’ Workshop in New Haven, Connecticut for many years. He is president of the Texas Institute of Letters and has served as a judge for the PEN/Faulkner Award for Fiction and the New Letters Literary Awards in the Essay Category. His work has recently appeared in the Houston Chronicle, New Letters, Yale Review, Michigan Quarterly Review, and Texas Monthly Magazine.

A Fulbright scholar, he was also inducted into the Hispanic Scholarship Fund’s Alumni Hall of Fame and the Texas Institute of Letters. The El Paso City Council voted unanimously to rename the Ysleta branch public library as the Sergio Troncoso Branch Library. Later the author established the annual Troncoso Reading Prizes for students in Ysleta. 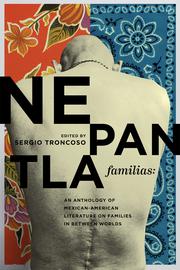 In an anthology that feels long overdue, Troncoso gathers 30 Mexican American writers to relate their accounts of what it means to be an American or, more often, what it means to not feel fully American. The anthology, which is divided into fiction, nonfiction, and poetry, contains mostly never-before-published works woven together by the common thread of “nepantla,” a Nahuatl word that means “mutual place” or the “in-between.” Alex Espinoza discusses being rejected due to his queerness, viewing his experience through the lens of machismo and alcoholism, two powerful forces that he notes often exist in tandem. In a short story, feminist poet ire’ne lara silva explores the concept of “crossing over” in Mexican culture, both literally (to the U.S.) and in the afterlife, while Octavio Quintanilla’s short poem conveys the fear of law enforcement that can often haunt immigrants long after they arrive in America as well as the constant threat of deportation. The liminal spaces in which these moving, sometimes heart-wrenching stories take place range from the geographical to the metaphysical. Often, the literal borders erected to keep out Mexican migrants become metaphors for a deeper struggle to find the meanings of us and them. Many of the writers express a frustration at being either “too Mexican” or “not Mexican enough." The rejection from both sides foments a desire to belong to something uniquely apart from either, giving birth to a diaspora that embraces the idea of existing in several worlds. “The either/or proposition that forces you to choose between your community and, say, your country has never been true,” Troncoso writes in the introduction. “The very skills we learn to cross borders within ourselves help us to cross borders toward others outside our community.” Other contributors include Sandra Cisneros, Reyna Grande, Francisco Cantú, and Stephanie Elizondo Griest.

A deeply meaningful collection that navigates important nuances of identity. 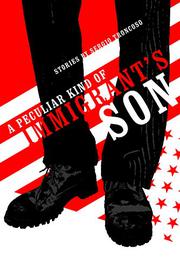 A PECULIAR KIND OF IMMIGRANT'S SON

Linked tales of exile and the quest to belong in an unwelcoming world.

“Heart attack last night. I thought you’d be happy. Karma.” So says a Japanese American friend to Merrill Lynch analyst Ricky Quintana, a habitué of big city coffee shops and gourmet groceries, remarking with satisfaction on the death of a right-wing TV blowhard “who hates immigrants.” Ricky, born, like author Troncoso (The Nature of Truth, 2014, etc.), in the border city of El Paso, Texas, gets no particular satisfaction from the talking head’s demise, despite his own surreptitious role in it; as with the Bruegel portrait of the fall of Icarus, nothing in his world is rattled, and “nothing seemed out of place.” So it is with David, who, Gatsby-like, materializes in New England, leaving his father, “a crazed Mexican Vulcan, forging the meat of labor into capital,” and mother behind in El Paso to become a rare brown face at Harvard—and then a man who thereafter had to throw himself against one obstacle or another until, as he notes, quietly, “I got old, and that made everything better, including me.” Carlos, the “peculiar” son of the title, is contemplative, aware of the differences between him and the people around him. So is Maribel, who cleans motel rooms while studying algebra, aspiring to a better life; for all her efforts, she finds nothing good in the “piss-colored light” of Jamaica, Queens. Troncoso’s New York is a place of splendid possibilities and sad endings, a place where the reviled Other, far from home, searches for a safe place to land—the “Library Island” of the dark story by that name, a “sacred haven” where one is safe to read and think, at least until the “Outer World” bursts in; the wintry streets of Manhattan; even the cemetery.

Troncoso’s sharp-edged stories speak to the difficult lives of those who, as he writes, are born behind in a race they must run all the same. 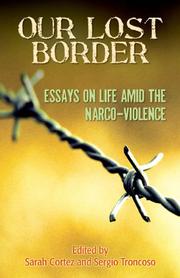 What has been lost is not a political boundary line between the United States and Mexico, but a 60-mile-wide cultural area above and below that line; the issues raised by the voices here reflect how and why that border has become a zone of fear, violence and bloody murder.

Cortez (Walking Home: Growing Up Hispanic in Houston, 2010, etc.) and Troncoso (Crossing Borders: Personal Essays, 2011, etc.) are writers and academics now living in Houston and New York City respectively, but both are deeply familiar with the border. They have divided their anthology into a journalistic portion titled “The Tortured Landscape,” in which four reports appear once in their original Spanish and then in an English translation, and a subjective section titled “The Personal Stories,” which includes eight essays, two by the editors describing the losses suffered by them, their friends and their families. The judgments of Mexico are harsh, with one writer asserting that “what we see now is a ‘result of a society that has been rotting for many years.’ ” The words “corruption,” “bribery” and “greed” occur over and over again, and both the government and the populace are described as passive and even complicit in the monstrous narcotics trade. Turf wars between drug cartels are unbelievably brutal, with torture, beheading and disemboweling seemingly everyday occurrences, leaving desolate such cities as Juarez and Tijuana. Nightly shootings, kidnappings, robberies and the discovery of mass graves—all these and more have put an end to a once-thriving tourist industry and a rich cultural exchange between those living on either side of the boundary. Where there were once bridges, there are now high walls. Some mention is made of the United States as the consumer of the drugs and the supplier of arms to the warring drug cartels, but this is primarily Mexico’s story, and it is a bitter one.

A tough but eye-opening read. 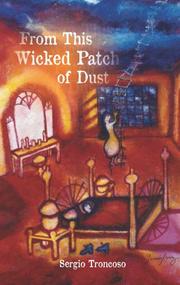 FROM THIS WICKED PATCH OF DUST

Troncoso tells the story of a Mexican-American family as they come to terms with their cultural heritage over a span of 40 years.

The new novel from Troncoso (Crossing Borders, 2011, etc.) follows Cuauhtémoc and Pilar Martinez and their four children in the border town of Ysleta, Texas. As the children grow up, they feel the pull of their parents’ love for Mexico and the opposing force of their own identities in America. Cuauhtémoc is able to retire early from working as a draftsman and travels with his wife, living off the income from the apartments owned by the family. Pilar, a Catholic mother who is stern but instills strong values in her children, is a hardworking housewife who sold Avon to help with the bills. However, she worries that she hasn’t done enough to fill her children with her beliefs: “Pilar was overcome with incredible sadness. Why had her children abandoned the church? Why had they become like grains of sand scattered throughout the desert?” The oldest, Julia, becomes Aliyah, converting to Islam and moving to Tehran with her husband and three children. Francisco is overweight and attending community college but works tirelessly at the apartments, playing the role of the good son. Marcos becomes a teacher and a member of the Army Reserve, marrying a white woman and living near his family in Ysleta. Ismael, the youngest, goes to Harvard and marries a Jewish woman, escaping the confines of his home in Texas only to meet with the labors of life as a man torn between his duties as a husband and his aspirations as a writer. Troncoso seamlessly intertwines the struggles the grown children face with their parents’ desire to help them become independent and proud Mexican-Americans. The prose is powerful in an unassuming way, making for a captivating read. The author carefully paces the book, with each chapter plotting an era in the family’s lives, ultimately joining the family’s collective narrative of religion and family obligation with the current events of the time. Troncoso is clearly adept at his craft, telling a story filled with rich language and the realities of family life and closing with a son reassuring his mother and literature reassuring them both. With its skillful pairing of conflict over religious and familial obligations with the backdrop of a Mexican-American family’s love for one another, Troncoso’s novel is an engaging literary achievement.

Publisher: The University of Arizona Press 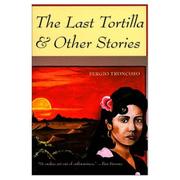 paper 0-8165-1961-7 The Last Tortilla ($40.00; paper $17.95; Sept. 3; 240 pp.; 0-8165-1960-9; paper 0-8165-1961-7). A debut collection of 13 stories dealing with El Paso’s often impoverished, invariably feisty Mexican-American populace. Troncoso’s immensely lifelike characters include “Tuyi, the fat boy everybody ignored,” in an unusually inventive coming-of-age tale (“The Snake”), an elderly grandmother (“The Abuelita”), whose undimmed zest for life implicitly rebukes her grandson’s scholarly pessimism, and a college student aglow with memories of the older Mexican woman whose “unabashed Bohemian warmth” sweetly overpowered him. Though sometimes slightly overexplicit, Troncoso’s wistful, endearingly romantic tales vividly dramatize the inherent richness of even subsistence-level lives. He’s a respecter of persons, and in turn his characters earn your affection and respect.

NEPANTLA FAMILIAS: AN ANTHOLOGY OF MEXICAN AMERICAN LITERATURE ON FAMILIES IN BETWEEN WORLDS: Kirkus Star

FROM THIS WICKED PATCH OF DUST: Kirkus Star

THE LAST TORTILLA: AND OTHER STORIES: Premio Aztlan Literary Prize, 1999

The Nature of Truth

The Nature of Truth is a philosophical novel about a Yale research student who discovers that his boss, a renowned professor, hides a Nazi past.
Published: July 15, 2003
ISBN: 978-0810119918