Shahid Insaf is a Psychiatrist, novelist and artist who lives and works in Branson, MO. His passion for writing was evident early on in the form of works of poetry and short fiction that appeared in local publications in Bombay, India, where he grew up. He won awards for essay writing in school and did not shy away from difficult and controversial topics like politics and psychology. He completed two novels in his teens, which were unfortunately never published.
At age ten, he realized that life is of paramount importance and that he would honor this conviction by becoming a physician. At age nineteen, he set out for the former USSR, where he spent seven years in medical school. This temporarily interrupted his writing career, but also provided him with a valuable substrate for ideas and themes for future writing. His appreciation of the complexities of the human brain and mind led to his desire to be psychiatrist.
He was an amateur boxer between ages 20 and 23. In 1998, he received a Diploma from the Institute of Children's literature for articles and short stories written for children and teenagers. In addition to writing, he also kept alive his interest for oil-on-canvas painting and has painted several portraits, landscapes and surrealistic paintings, many of which have been sold to individual collectors.
Shahid Insaf also has an interest in poker and has played in the WSOP in Las Vegas on two separate occasions. He identifies a lot of similarities between the game of poker and Psychiatry, both of which can be much better understood from the perspective of Game theory.

The practice of Psychiatry has certainly been one of the most important factors in shaping his interests, writing style and even the themes he writes about. A person's motive for doing something, in his opinion, is the most important element that makes for gripping, meaningful fiction. His philosophy of individualism permeates his writing and discussions with friends and loved ones. Integrating his philosophy with aspects of psychology has been a constant quest, and his first published novel, '3 tales of Vengeance' is a perfect example of this effort.
His essential goal for writing is to create memorable, unpredictable characters that the reader will remember long after the book is over. Characters who, through their actions, enable the reader to have a rich emotional and thrilling experience, while also providing valuable insights into human motive, morality and behavior.

“All three stories have laudable endings, but “Love” is a slam-dunk and sure to make most readers peruse the tale again—or possibly the entire book. Potent stories and strong-willed characters converge to form a well-rounded collection.”
– Kirkus Reviews 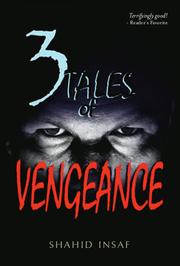 This debut thriller, a trio of novellas, features characters who crave some type of retribution and go about achieving it in diverse ways.

Insaf smartly opens his book with a traditional revenge story. In “Vengeance for a Friend,” a narrator called “Man” awakens to three strangers, who’ve apparently gassed him before shooting and beating to death his best friend, Mike. The narrator, a former homeless street fighter whom Mike had taken in, narrowly escapes when the three men set the house afire. He tracks down one of the killers whom he’s dubbed The Smoker (a cigarette perpetually dangling from his lips) and enacts swift and bloody vengeance. The same fate will surely befall the other two, provided he can find them. Revenge isn’t so clearly defined in the remaining two stories. The somewhat reserved “Vengeance for a Life” follows Sam Chance, whose daughter Lucy’s death from leukemia led to his mental collapse. The plot largely consists of Sam’s sessions with psychiatrist Dr. Garrett, who tries to help the suicidal father overcome his guilt, having left his family when he could no longer bear seeing his sickly daughter. The titular vengeance—whose or why—isn’t revealed until later, with a conclusion that, though somber, is surprisingly bittersweet. The final story, “Vengeance for Love,” is both the best and most exhilarating. In it, poker player Striker’s just walked away from a tournament win with a cool $1.6 million. A raspy-voiced anonymous caller, however, wants the cash for himself. He’s kidnapped Dave, Striker’s pal and benefactor, who provided him with seed money for the tourney. The caller likewise knows about Striker’s family, and soon his wife and daughter are in peril as well. Insaf’s prose is straightforward, befitting characters like the narrator in “Friend,” whose single-minded goal is the sole driving force. There’s little humor, but when it does pop up, it’s certainly hard to miss, particularly when Striker calls the violent, menacing kidnapper a “fat turd.” All three stories have laudable endings, but “Love” is a slam-dunk and sure to make most readers peruse the tale again—or possibly the entire book.