Shannon Bradley-Colleary’s writing career began in 1998 when she sold her original feature, "The Lion Sleeps Tonight," to Warner Brothers Studios for Mark Canton and Jeff Robinov.

Screenwriting:
Shannon has since written scripts for Warner Brothers, Disney, Fox Family, TBS and Lifetime Television; covering an array of topics from teen dating abuse to fat farms, casual sex, homophobia, being a child of divorce and the first years of the Second Gulf War.

She’s currently represented as a screenwriter by Ann Blanchard at CAA and her half-hour, single-camera comedy "Kitty With A Whip" is going out to market this month with David O’ Russell tentatively attached. Emma Watson is attached to Bradley-Colleary’s feature length period piece set in 1959 Wakeeny, Kansas, called "Loving Iris."

Books:
Shannon’s first book, a memoir titled "Into The Child: 40 Weeks in the Gestational Wilderness," was named one of the Top 100 Indie Books of 2012 by The Kirkus Reviews.

“Colleary’s humor and warmth flow seamlessly from conception to birth in this well-written, snappy read. A hysterical account of pregnancy that will resonate with readers who've been through it before.”
– Kirkus Reviews 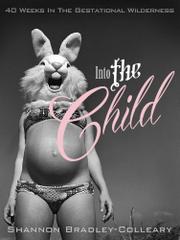 Sometimes sweet, sometimes sassy, screenwriter and blogger Colleary tells all with witty sarcasm and edgy, laugh-out-loud humor. She begins with conception and the results of a home pregnancy test before careening through laments of sleepless nights, mood swings, weight gain and nausea with snappy but snide remarks most pregnant women think but few express. Colleary’s book is a fun, literary romp for any woman who has experienced “The First Trimester Through Hell” and lived to read the tale. The former homecoming queen and INXS backup dancer, now the pregnant mommy of one, alternates between admitted snobbery (“I saw stay-at-home moms as the kind of women who sat in the fifth pew of fill-in-the-blank church, smiling with bland acquiescence, who thought Danielle Steele novels were literature”) and a self-deprecating appraisal of her blossoming physique (“Some days even my earlobes feel fat”). Each chapter notes the gestation time in weeks and days, recounted in diary style, and draws readers into one delicious admission after another. Colleary professes a jealousy for the skinny, overachieving Gwyneth Paltrow and a tendency toward fantasies involving George Clooney. She regales with funny tales of an overbearing lactation nurse screeching about the importance of colostrum and a would-be caregiver whose secret life, the author fears, will eventually be revealed on a daytime talk show. Colleary’s humor and warmth flow seamlessly from conception to birth in this well-written, snappy read. A hysterical account of pregnancy that will resonate with readers who’ve been through it before.

The Catcher In The Rye, The Bell Jar

I threw down my enemy and smote his ruin upon the mountainside.

Speaking Spanish with an excellent accent and questionable grammar.

INTO THE CHILD: "40 WEEKS IN THE GESTATIONAL WILDERNESS": Kirkus Star

Body Image: What Nude Photos Told Me About My Body At 26 ... and 46, 2012 The Date Rape Story I'll Someday Share With My Daughters Talking About Date Rape: Mother To Daughter The Today Show: Body Image

Smash, Crash and Burn: Tales From The Edge Of Celebrity

Smash, Crash and Burn: Tales From the Edge of Celebrity is a coming-of-age memoir set in late-80s/early-90s Hollywood. Twenty-two year old Shannon Bradley, having pillaged a broadcast journalism degree from USC, plans on taking the broadcast news world by storm as the next button-eyed, bloodthirsty Deborah Norville. Unfortunately Shannon’s first on-the-scene of a fatality – a heart attack victim who reminds her of her father – leaves her weeping with camera and microphone in hand, poliecmen consoling her. Hence the catalyst for her ignominious trajectory into the life of a wannabe starlet when Axl Rose was still lythe and luscious. Shannon thinks she wants to become an adored household name living in the rarefied realm of celebrity. What she gets instead is a series of adventures that serve to both humiliate and humble her all the while leading her on the path to a home she didn’t realize she was looking for. Sannon shares her rites-of-passage with other upstart young dreamers. A few of these talents are now well-known celebrities: David Schwimmer, Roman and Sofia Coppola, Gwyneth Paltrow. Others, like Brandon Lee -- son of legendary marial artist Bruce Lee -- had their trajectory to stardom cut short. Shannon tells their stories as she tells her own - in the frantic, funny and frequently poignant voice of her popular blog, The Woman Formerly Known as Beautiful.
Published: March 20, 2013
ISBN: B006AZEQAO