Shawn Scuefield is the author of the new series, The Retired Detectives Club, as well as the sci-fi/horror short story collection, Short Days, Long Nights. Some of his early inspirations include The Twilight Zone, Star Wars, Doctor Who and early 80's sci-fi horror classics such as The Thing (1982), Phantasm and Phantasm 2. A noted bourbon enthusiast, other hobbies include weight training. The author lives in Illinois with his family.

“Raines is … a cool, appealing protagonist … satisfying … readers will surely welcome a series that features these whip-smart sleuths.”
– Kirkus Reviews 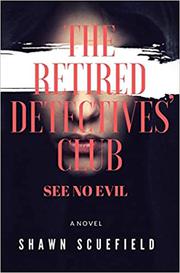 In Scuefield’s (Short Days, Long Nights, 2018) mystery, two Chicago private eyes find that a missing girl in Louisiana may be connected to a string of disappearances.

After retiring as a Chicago homicide detective, 63-year-oldRobert Raines has been determined to focus on his wife, Elena. However, he can’t stop trying to solve old, unsolved cases, so the couple separates after 42 years of marriage. Soon, Raines and fellow 60-something retiree Dale Gamble manage to close a few cold cases, which leads the pair to open RDC Private Investigations along with Cendalius Ashe, a combat veteran whose possible PTSD may have been why he left the forceatthe age of 44. Less than a month after they open the new business, Raines agrees to help out the McAllisters, his brother-in-law’s friends, in Alexandria, Louisiana. They say that their granddaughter, Cecilia, has been missing for three weeks, so Raines and Gamble head south, where the Alexandria police are surprisingly accommodating. The local cops arrest someone who’d threatened Cecilia, but the PIs think they’ve got the wrong man. Their investigation soon takes them to tiny Pollock, Louisiana, where the sheriff is less friendly than Alexandria law enforcement. Pollock police officer Dakota Quinn, however, has connected three missing person cases in town. All of the missing had responded to ads via a trading app,which Cecilia had also used. Raines, Gamble, and Quinn look into the app further, which makes someone nervous enough to fire a gun at them. Meanwhile, a serial killer from one of Raines’ unsolved cases may be stalking people in Alexandria.

The story introduces the kidnapper to readers early on, but Scuefield still keeps the tale shrouded in mystery. For example, readers only gradually learn about the abductor’s connection to numerous women who disappeared over an eight-year period; they also find out about someone who’s providing the kidnapper with assistance. The villain’s perspective provides some unsettling, occasionally violent sequences. Meanwhile, Raines is shown to be a cool, appealing protagonist who admits his faults—perhaps rightly blaming himself for his marriage’s dissolution. His similarity to Gamble curiously highlights Raines’ shortcomings: They’re both former cops and often think alike, but the still-married Gamble, who’s three years older, looks considerably younger than Raines. Nevertheless, Ashe and Quinn prove to be far more intriguing characters; Ashe, who joins the investigation later, is able and shrewd but has a more flexible moral code than his partners do, and Quinn, who gets no respect from her boss and her peers, ultimately uncovers the case’s most substantial pieces of evidence. Readers learn relatively little about Gamble’s background, but the author may explore it in future, planned series installments. Scuefield’s sharp prose smoothly shifts through various first- and third-person perspectives, including Quinn’s, Raines’, and even those of a few victims and victims-to-be. He also manages to skillfully incorporate Robert’s unsolved cold case, and although the story’s wrap-up feels hasty, it still offers readers a satisfying resolution.

Readers will surely welcome a series that features these whip-smart sleuths.