St John is a writer, historian and ornamental hermit who likes to live near exciting things so he can not go to them. He has a love for anything unusual, eccentric and ridiculous — like radium cures and fancy neckties. He spends his time plotting his own spectacular demise. 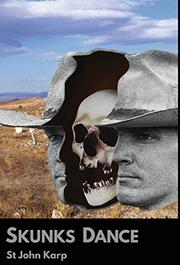 Two California teenagers search for an ancestor’s treasure in this comic novel that crosscuts between contemporary and Gold Rush eras.

Spivey Spillane, age 20, arrives in the California Gold Rush town of Skunks Dance on the trail of Alabama Sam. Spillane first met this elusive trickster when he showed up to swipe the Bible with a treasure map that was found on a Spaniard who had arrived, then died, at the Spillane family farm in Tennessee. The story then shifts to modern-day Skunks Dance, introducing teen protagonists Jettison “Jet” Allan-Ashwood, son of circus acrobats, and Amanda Spillane, part of the still-fortune-seeking Spillane tribe. These high schoolers initially seem to dislike each other, with Amanda sending a rock through Jet’s house and Jet managing to blow up her car. Yet the teens soon join forces to follow new leads regarding the long-sought-after Spillane gold, including examining the insides of the never-completed model for a statue of the headless Spillane (as he was found long ago) now erected in the town plaza, and climbing up Skunks Dance’s nearby Spanish fortification ruins. More details on both quests then unspool in alternating chapters, with Spillane led through teasing traps by Alabama Sam (including, at one point, being forced to wear a tutu) and the teens, with Jet’s wisecracking younger sister Gina sometimes in tow, coming to suspect town elders of serious, indeed murderous, wrongdoing. By the story’s end, unexpected fates and directions for Spillanes both past and present are revealed. Karp (Radium Baby, 2013) imaginatively combines absurdism and adventure with snarky teenage sleuthing and a sense of the macabre in this ambitious sophomore effort. The Gold Rush parts of the narrative are particularly surreal and striking, with the to-the-death dynamic between Sam and Spillane taking on a doppelgänger dimension. The romances are also entertainingly offbeat, with Spillane acquiring a feisty, gunslinging female cohort, and Amanda becoming attracted to Jet’s clinging ex-girlfriend Nina. While generally amusing, this tale’s comic details are occasionally overplayed, such as the time spent on a subplot about Jet’s father being charged with “sexual assault with a candy Wolverine.”

A colorful, exuberant romp with an appealing fortune-hunting duo. 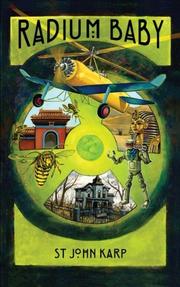 In Karp’s debut young-adult novel, three preteens compete to prove their connection to famous scientists who died more than a decade ago.

In 1927, 13-year-old Sam Ticky lives in Claremore, Okla., also known as “Radium Town,” because the chemical element bubbles freely from the ground, like oil. He works at the radium baths, where people soak in an effort to cure themselves of ailments such as barnacles and gout—despite the fact it might possibly be dangerous. According to Sam’s adoptive father, Sam is the biological son of the well-known scientists Alexander and Valerie Pepperpot, who gave him up after they died; as a result, science is his heritage. Meanwhile, in New York, Clive Chapman ponders the fate of his Sun Studios Radio Corporation. Ratings are falling, even on his most popular shows, and he needs something brilliant to turn his business around. When the U.S. government asks for his help in finding the Pepperpots’ missing child, he dreams up a contest. Soon, Sam is competing against two other finalists who share his birthday, Gloria Noakes and Hadrian Sands. The prize: the Pepperpots’ estate. The contestants must solve a series of puzzles staged in China, Egypt and Boston as they try to provide proof of the identity of  the real “Radium Baby.” Throughout this adventure novel, Karp’s madcap imagination keeps readers hungering for the final outcome, and his prose sparkles with his flair for the absurd: For example, the Pepperpots “invented the hamster wheel, the hamster cage and the hamster feeder, then rounded off their list of achievements by inventing the hamster.” The contest’s puzzles, which involve such diverse elements as hornets’ honey and the Eye of Tutankhamen, have surprise twists, but Karp isn’t merely a showman. He’s also capable of dreamily evocative scene-setting (“Everything hit [Sam] at once...the temples with roofs like dog-eared paper, [and the] fine statues and filigree metalwork tracing spider webs across the walls and ceilings”) and manages to end his tale on a truly profound note.

"The Order of Odd-Fish" by James Kennedy

With an host of furious fancies whereof I am commander, with a burning spear and a horse of air, to the wilderness I wander.

Making an enormous racket on the ukulele.