Stacey D. Atkinson grew up in rural New Brunswick (Canada), where she lived with her mother and sister in an old farmhouse with a pack of cats and acres of land for roaming. She first fell in love with words as a songwriter, learning to play guitar, which became the backdrop for her writing. She now writes novels about strong female characters in memorable settings along the East Coast.

Stacey's debut fiction novel STUCK is a coming-of-age story set in the picturesque Acadian fishing village of Pointe-du-Chêne, New Brunswick. It's an emotional journey about redefining what’s important in life and staying true to yourself. One reviewer likened the book to "a modern-day Cinderella story" because of its hopeful message: the choices you make in life can either bring you down or set you free.

In the story, Odette Leblanc is promoted to night-shift supervisor at the local convenience store, but at the age of twenty-three, she already feels like her life has become a predictable routine. That is, until she meets a mysterious doryman and his cat on the beach, followed by an unexpected run-in with an American sailor. Each man will undeniably change the course of her life, and so will the selfish actions of her bingo-addicted alcoholic mother, an impressionable younger sister, and a team of damaged co-workers. Their stories weave together only to unravel in a mess of lies, betrayal, and missed opportunity that will leave Odette to face an uncertain future.

Stacey's next project LETTERS FROM LABRADOR is a creative non-fiction book that tells the story of a young British nurse working in the beautiful yet unpredictable northern coast of Labrador, Newfoundland. Through letters sent home to her mother, the book reveals stories about hardship, poverty in Aboriginal and Inuit communities, heroic rescues, aging and memory loss, and the making of lifelong friendships.

“A moving story steered by a likable if imperfect heroine whose combination of grit and hard luck will win readers hearts.”
– Kirkus Reviews 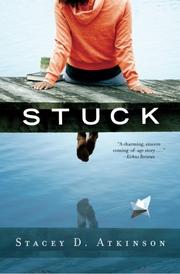 Though Odette LeBlanc has just been promoted to night supervisor at the convenience store, where she’s worked since graduating high school, the smart, hardworking 23-year-old longs for a life less ordinary. But working by night and sleeping by day in the trailer she shares with her compulsive-gambler mother and dangerously precocious 15-year-old sister, Odette has a difficult time envisioning anything beyond the drowsy New Brunswick village—until she meets a rich, handsome stranger visiting for the summer, and a lie of convenience becomes a chance for her to live out a pretend privileged life. Sailing at the local yacht club instead of sleeping takes a physical and emotional toll, however, and yet another handsome stranger—a mysterious free spirit who lives on a ramshackle, refurbished fishing boat—gives Odette a glimpse into a better future that doesn’t depend on money. Though these love interests aren’t far from being stock characters, Atkinson’s treatment of class is actually quite nuanced, and the rhythm of this debut, revolving around Odette getting up every evening and going to work the night shift, perfectly captures the hopeless routine in which her life is suspended. The night-shift scenes of Odette and her co-workers—aimless young people and a few adult immigrants, for whom the concept of “a better life” differs considerably—are some of Atkinson’s strongest. The other characters outside the central plot are also vividly conjured, including Odette’s best friend, Anne, whose sense of possibility is wrapped up in her long-term relationship—something naggingly absent in Odette’s life. Though the novel’s beginning tends to be heavy on exposition, and the resolution has swift closure thanks to a deus ex machina, Odette’s struggle not just to get out but first to simply imagine a way out is incredibly touching. The novel might be about a dream of escaping, but readers will be happy to stay.

A moving story steered by a likable if imperfect heroine whose combination of grit and hard luck will win readers’ hearts.

An interview with Stacey D. Atkinson at Book Expo America 2014 in NYC.

Something there was in her life incomplete, imperfect, unfinished. (Evangeline by Henry Wadsworth Longfellow)

A story about a young British nurse who came to Canada to work in isolated nursing stations in the North, and the amazing things she saw and did while there, including heroic rescues and the making of lifelong friendships. The book also explores the theme of memory loss through Lewy Body dementia, which is linked to Alzheimer's and Parkinson's disease.