Stef Kramer is a busy working mom who writes, blogs, and toils as a bank CFO by day. She lives on a farm with her husband, two kids, a yippy dog and a snippy cat. Growing up in small town Iowa allowed her to really absorb Little House on the Prairie while fervently wishing to be on The Love Boat or Fantasy Island. She has won the Author's First Short Story Prize which became published in an anthology, has been a runner up in The Story Plant's Novel-Writing contest, won two Honorable Mentions for the Writer's Digest Short Story Competition, and received a five star rating from Writer's Digest Self-Published Competition for Goodbye Def Leppard, I'll Miss Those Jeans. Her blog Mama's Alphabet Soup (stefkramer.blogspot.com) has reaches 1,000 views per month. As a University of Iowa English major, Stef graduated with High Distinction and has her MBA from Creighton University. She was also named as a Woman Banker of the Year by Northwest Financial Magazine.

“A captivating tale about growing up best suited for nostalgic members of Generation X.”
– Kirkus Reviews 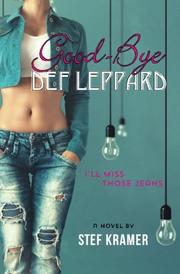 In Kramer’s debut novel, a middle-aged mother remembers falling into a complicated romance in the early 1990s.

Amy Gaer is a harried working mother. After a busy day, she listens to her young daughter practice for a music recital and recalls her own youth. Thus begins a flashback to Amy’s early 20s that lasts for nearly the rest of the novel. Readers meet young Amy as she completes what might be her final year at the University of Iowa. She’s trying to determine what to do with her life: follow her dream of a musical career or choose something more financially responsible, such as law or business, as her parents hope she will. She returns to her childhood home in rural Iowa for the summer, where she begins an internship at a local bank and meets Nick Klein, who’s in the process of getting divorced—and who quickly gets under her skin. As soon as his divorce is final, the two begin to date, but Nick hopes to keep things casual so that Amy won’t feel reluctant to leave town in pursuit of professional goals. The only thing Amy knows for sure is that meeting Nick has made her choices much more complicated. As she tries to map out her future, she must navigate lingering, complex relationships from her past as well as surprisingly large doses of sexism in the workplace. All the while, Kramer keeps the music of the late 1980s and early ’90s (such as Guns N’ Roses’ “Welcome to the Jungle” and Pearl Jam’s “Even Flow”) playing in the story’s background—so much so that some readers may feel compelled to sing along. As the author transports these readers to the grunge era, she also explores difficult issues surrounding social inequality, infidelity, and, especially, coming-of-age. Meanwhile, the romantic suspense and social calamities that pepper the narrative keep it moving along at an engaging pace. As Amy struggles to find the wisdom and maturity she needs to sort out her future, readers will find themselves in her cheering section.

A captivating tale about growing up best suited for nostalgic members of Generation X.

A Tree Grows in Brooklyn by Betty Smith

CFO for a bank

"Tell the Truth and Write the Story." A Tree Grows in Brooklyn

This is the compilation of the short story winners from Author's First. My story Phoenix Sun is about a mother who leaves her family in search of meaning.
Published: July 7, 2015
ISBN: 1611882133