Within the pages of The Triumph of Water Lily, Ify Osammor has been thorough in her narrative, indicative of much research and diligence. I praise her for this excellent piece and for the great effort she has put in - for this, she deserves great respect and recognition both locally and internationally.
I have personally witnessed the agonising experiences of persons, who have been involved in situations such as those described so vividly in this book, making them feel, in some cases, that the pursuit of justice may be in vain. The events are everyday life experiences, which many Africans and particularly Nigerians will readily align with - this is familiar terrain.
I readily commend this book to all strata of our society and pray God that it will be a real blessing to its many readers. I commend it also as a book of reference; for those wishing to know about Africa and in particular, Nigeria, 'The Triumph of the Water Lily' is a good start.
Dr Christopher Kolade (Nigeria's Ambassador to the United Kingdom 2001 - 2006)

“Osammor’s book provides a snapshot of a woman’s life in Nigeria. Her use of accented English and her rich descriptions of the food and clothing of Lagos, Ibadan, and the surrounding regions are transporting. She touches on such cultural topics as war, politics, religion, and journalistic ethics, and also describes a traditional wedding in intimate detail.”
– Kirkus Reviews 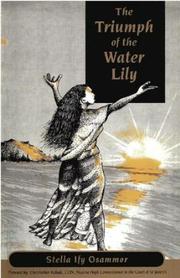 The Triumph of the Water Lily

Osammor’s debut novel follows the life and love of a strong Nigerian woman.

Effua is a foreign correspondent for the British newspaper The Guardian. Her current assignment as an instructor at a three-month seminar for new journalists brings her back home to Lagos, Nigeria. She’s happy to be home but dismayed to learn that her good friend Nkem has separated from her husband. Though Nkem’s motivations seem sound and their own friendship remains solid, Effua is worried about Nkem’s emotional well-being. Nkem can’t conceive children, so when her ex-husband and his new wife announce the impending arrival of a child, Effua’s heart breaks for her friend. But despite her concerns and a busy work schedule, Effua finds herself entertaining romantic thoughts of her own. Norman, a journalist employed by the Nigerian president’s press office, has been pursuing Effua for years and has recently stepped up his game. Though she initially resists his overtures, she soon finds herself spending more and more time with the handsome, intelligent man. Osammor’s book provides a snapshot of a woman’s life in Nigeria. Her use of accented English and her rich descriptions of the food and clothing of Lagos, Ibadan, and the surrounding regions are transporting. She touches on such cultural topics as war, politics, religion, and journalistic ethics, and also describes a traditional wedding in intimate detail. But although Osammor successfully captures everyday moments, the overall narrative drags and wanders. There’s very little conflict or romantic tension to drive the plot forward; instead, the book reads more like a daily journal with anthropological details, and includes errors such as, “this is incredulous.” That said, there are passages of insight and beauty, such as Effua’s observation that Nkem,“through her pain and suffering and unfulfilled longing for motherhood; conceived within her generous self, something that was yet more precious than an offspring.” Yet sentiments such as these are lost in the rambling narrative.

ANT HILLS OF THE SAVANNAH

TODAY IS THE FIRST DAY OF THE REST OF MY LIFE.

The Triumph of the Water Lily: Africa Magazine , 2006

The Triumph of the Water Lily: FINAL SHORTLIST :ASSOCIATION OF NIGERIAN AUTHORS, 1996

The story of Kadeja is a haunting tale about the capture of a Fulani princess as she travelled through the African rainforest to her betrothed; the heir of the Ashanti throne. The book is an engaging tale about the ardent love and aspiration of 2 young people. The work is nevertheless a crucial teaching resource for Key Stage 2 and 3 History. The book “Kadeja the Fulani Pearl Queen” is a concise teaching resource; that enables teachers deliver excellent lessons about the Transatlantic Slave Trade. The book in its appendix section, examines the impact the trade had on different aspects of African life. Evidence from the various strands of social media,suggests that race relation is an important sociological element in the thinking of young people today. It must be mentioned that many young people don’t realise that white people of goodwill; such as William Wilberforce worked alongside fellow black Abolitionist such as OludahEquono (as life-long friends) to end the evil trade in human beings. The book flags this up in its appendix section and follow on work.
Published: Jan. 30, 2017
ISBN: 978-1904213468