Stephanie hails from the Victorian mining town of Leadville, Colorado, where she lives at 10,152 feet with her husband, five chickens, two bantam English game hens and one Cavalier King Charles Spaniel. After a former life in big cities-New York City, Tokyo, Hong Kong, Boston, Mexico City, Atlanta, Los Angeles and Santa Fe-she now enjoys the birdsong and quiet writing time she finds in Leadville. When she's not writing, Stephanie stays busy sewing fancy gowns, playing MMOS, running the historic Tabor Opera House and working as a part-time technology venture capitalist. Her first novel draws on her experience living and working in Japan; her next historical novel is set in Mexico where she also lived for several years. As a Leadville local, she likes her Victorian attire spiced with a little neo-Victorian futurism and the biggest bustle possible. 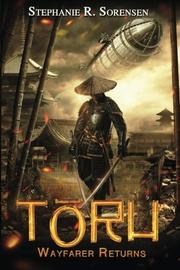 Defying his shogun’s ban on contact with the Western world, a young Japanese in 1852 uses smuggled blueprints and technology to create a hyperindustrial movement to thrust the nation forward into the modern age.

First-time author Sorensen launches her Sakura Steam series with a well-told what-if story that brings a steampunk aesthetic to real-life 1800s Japan. Tōru Himasaki, illegitimate son of a noble lord, arrives on the shores of southeastern Japan in 1852, having completed the first phase of a dangerous mission for which he was raised. Masquerading as a fisherman, Tōru pretended to be lost at sea and allowed himself to be rescued by passing Americans and taken on a grand tour of their country. Now, with two years of careful notes, books, factory blueprints, gadgets, and intel, Tōru comes home—facing execution as a traitor for violating Japan’s centuries-old policy of sokoku, or isolation, that has time-frozen the island nation into a feudal condition. Fortunately, Tōru manages to convince a few local lords of the desperate need to drive Japan forward into industrialization before the inevitable invasion by America and other foreign imperialists. In just a few seasons, Japanese facsimiles of guns, telegraphs, railways, early computers (Charles Babbage’s “difference engine”), submarines, and airships are under feverish construction—but with as much secrecy as possible due to the iron rule of the myopic, dictatorial Tokugawa Shogun, who may view such progress as a threat to his own power. Sorenson cunningly blends far-out fiction with actual historical personages (many of whom may be unfamiliar to round-eyed barbarian readers) and a Meiji Restoration–era mindset. If there seem to be a few stereotypes reinforced here (math-crazed, sword-swinging Asians, as industrious as ants as they vastly overhaul their whole culture nearly overnight), the urgency and echoes of real-life drama can still resonate. It’s no accident that the author name-checks Hiroshima and Nagasaki as historically vital port cities of old. Young adults as well as older readers can partake of the delicious genre-blending bento.