Stephanie Siciarz was born in the US and is a graduate of Georgetown University and The Johns Hopkins University. She is a writer and translator and has worked for high-ranking officials in international, government, and academic institutions in the US and Europe. She currently resides in Ohio, where she is on the faculty at Kent State University. Her debut novel, Left at the Mango Tree, was named to Kirkus Reviews’ Best Books of 2013. Her second novel, Away with the Fishes, was released in 2014. 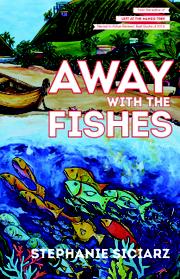 AWAY WITH THE FISHES

Award-winning author Siciarz (Left at the Mango Tree, 2013) returns to the fictional island of Oh for a fresh mystery in this witty companion to her debut novel.

When the tropical island of Oh gets quiet, that can’t be good. Oh’s lone newspaperman, Bruce, has no news to report besides the occasional rainbow, until an anonymous personal ad is placed in the newspaper, sending the citizens—including Trevor the baker, Branson the teacher—into a frenzy of speculation. Raoul, the mystery-loving customs agent, wants no part in Oh’s gossip, but when a mysterious message appears on the side of his house, he has no choice but to become involved. A mangled bicycle and a missing woman add to the drama, and the bumbling police officers Arnold and Joshua begin to concoct a case that Oh’s newspaper laps up. When fisherman Madison Fuller is accused of murdering the missing woman, his sister, May Fuller, scrambles to clear his name. High jinks and gossip abound as everyone adds to the story of the crime, and more messages painted on Raoul’s home urge him to investigate what others on Oh are not. He’s led to Mrs. Jaymes, house help to the late Capt. Dagmore. Dagmore’s origin story becomes a novella within a novella, and several chapters pass with Raoul trying to pull pertinent information from Mrs. Jaymes’ memory. If Raoul is frustrated by Mrs. Jaymes’ long tangents, readers will also be irked as the story rambles along, piling more characters from Dagmore’s life on top of the mystery at hand. Yet as Oh prepares for its first courtroom trial, Raoul learns what he needs to know, and with a flourish, he’s able to provide the final piece of the puzzle. The flavor and wit that decorated Oh the first time around are still present in this sequel, with snappy dialogue, well-timed plot twists and Siciarz’s lyrical sentences. Dagmore’s meandering origin story sometimes deters from the immediacy of the mystery, and his multiple names (e.g., Quick, Bowles) can be a bit confusing. The novel’s big reveal isn’t a huge departure from Left At The Mango Tree, as family secrets and heritage again hold the keys to Raoul’s burning questions. Nevertheless, it’s an island tale as charming and whimsical as Siciarz’s first.

Beautiful language, delightful storytelling and a fully imagined world make this return trip to Oh worth the ride. 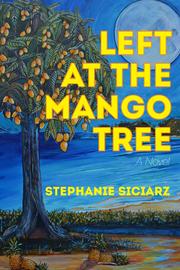 LEFT AT THE MANGO TREE

In this remarkable debut novel, a young girl named Almondine narrates the mystery of her own birth on the whimsical island of Oh.

In the tropical island country of Oh, Raoul Orlean wants to know two things: Who is his granddaughter’s true father, and where did the missing pineapples go? The decline of the pineapple trade has left an abundance of the prickly fruit; Raoul, the sole man at Oh’s international customs counter, can present one to every tourist who deplanes, and outside the airport, his friend Bang sells penknives for cutting the pineapples. Nat, owner of a fleet of mismatched vehicles, drives the tourists to and fro, most likely depositing them at Oh’s popular bar, the Buddha’s Belly, overseen by the jolly and generous Cougar. Raoul, Almondine’s grandfather, is troubled by her arrival in the world. She looks nothing like her faithful mother or father but everything like Gustave, the manager of a pineapple plantation. Raoul could dislike Gustave enough based on this suspicion, but then he awakens to a new surprise: Two acres of Gustave’s pineapple plantation have “disappeared” overnight. The country of Oh cries black magic. Raoul—and by extension, the Office of Customs and Excise, whose government export tax the disappearance avoids—cries foul. Aided by his favorite nonfiction detective books, he diligently sets out to find his granddaughter’s origin and the missing pineapples. Oh seems to be a place overflowing with gossip and magic, but Raoul’s friends and family might hold the answers. The novel is built upon Almondine’s incredible narration, as she coyly pulls the reader along on these tandem mysteries, weaving in and out of her family’s stories and secrets. Her witty, pun-filled language and swift storytelling imbue the novel with charm, yet for all the back stories and interweaving, Almondine is careful to keep readers by her side as she unravels the detailed story of her grandfather and his friends. Siciarz has a talent as plentiful as Oh’s pineapples, and readers will hunger for more.

A tropical feast of charming, clever characters, smart storytelling and just the right amount of magic. 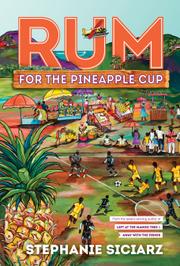 Rum for the Pineapple Cup

The third installment of mystery novelist Siciarz’s (Away With the Fishes, 2014, etc.) Island of Oh series, featuring the continuing adventures of the fictional tropical island’s customs and excise officer, Raoul Orlean.

As the story begins, Raoul has forgotten his librarian wife Lila’s birthday. He visits shop owner and bewitching mystic Cora Silverfish for a last-minute piece of jewelry, knowing that her gems have a reputation for being enchanted. He also knows that he’ll get a good deal, now that her shop is set to go out of business. She selects a gemstone for him that comes complete with a spell to ward off the spirits of darkness, and this comes in handy later, when Lila receives only a minor injury from a fall. A faded cricket player, Seafus Hobb, cryptically warns Cora not to close her shop; he blames her for his diminished former sports career and his present job as an oddities-museum curator. A merciless, manipulative local newspaper editor, Bruce Kandele, stirs the pot by saying that Lila’s injury may be the result of some “malicious intent” by Cora, due to some philandering by Raoul. Soon, accusations begin swirling around Lila’s faithfulness as well. Questions also arise about officer Dwight Williams’s clandestine (and possibly illegal) deliveries to businesses from a sketchy curator. Meanwhile, the island’s annual Pineapple Cup soccer tournament approaches. Raoul once again dons his investigative hat and does the spadework to catch guilty parties in action. Is Dwight a courier of criminal contraband? Is someone intercepting packages at Seafus’ museum? Will the intuitive Cora save the day, or is she a co-conspirator? Needless to say, the resolution is swift and justice is served, although readers will find that much of the plot is obvious by the middle portion of the novel. Overall, though, the author is in fine form once again, using the same breezy storytelling and likable, engrossing characters that have made the Island of Oh popular. Siciarz shows Raoul demonstrating some investigative skill and, in typical frenzied fashion, dashing across the island in search of answers with a spontaneously planned sting operation. Even though the mystery this time around is more loosely drawn than in past volumes, fans of the series can rest assured that the island remains in good hands with folks like Raoul Orlean on its side.

The Elegance of the Hedgehog, The Life of Pi, Things Fall Apart, Anna Karenina

"Though the doctors treated him, let his blood, and gave him medications to drink, he nonetheless recovered." (Tolstoy, War and Peace, Pevear/Volokhonsky translation)

Named to Kirkus Reviews' Best Books of 2013: LEFT AT THE MANGO TREE