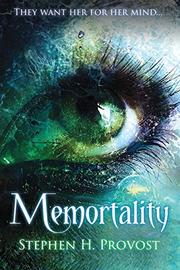 Provost (Fresno Growing Up, 2015, etc.) delivers a novel of supernatural suspense about a young woman’s ability to shape reality.

After a car accident at the age of 6 leaves her paralyzed from the waist down, Minerva Rus’ life seems to be one long struggle. Not only did the accident confine her to a wheelchair and kill her dear friend Raven Corbet, it also left her at the mercy of her cruel mother Jessica Meyer, who doesn’t possess the skill set to properly care for a disabled daughter. Fifteen years after the fateful accident, Raven suddenly appears in Minerva’s bedroom. Although he’s now apparently 23, he still wears his old Legend of Zelda T-shirt and shows a fondness for her. But is it really Raven or merely an apparition? Meanwhile, Jessica gets closer to a man named Bradley Carson that she met at the supermarket. He’s no ordinary suitor, but actually an undercover operative whose real name is Anthony Biltmore, working for a secret government organization known as the Federal Intelligence Network. He’s no stranger to covert operations or to the violence that they often require. It’s soon apparent that Minerva possesses a power that’s of great interest to Carson’s organization—one that may get her killed. The narrative takes some time to gather speed, as it begins somewhat clumsily with a flashback to one of Carson’s missions and a slow-paced scene that focuses on Minerva’s difficulty returning to her classes after her accident (“School was different now”). Once things do get going, however, readers will find it hard to predict what will happen to Minerva, particularly as the characters mature and the plot developments blur the line between the living and the dead. Carson proves to be more than just a coldblooded agent, and later portions suggest that even Jessica is capable of change. Although Minerva’s special ability isn’t particularly riveting, the plot possibilities multiply after its revelation.

An adventure that’s slow to get started, but its otherworldly aspects help it to race to its conclusion.

If you grew up in Fresno, California, there are people and places you will never forget: Al Radka. Christmas Tree Lane. Fulton Street?before it was the Fulton Mall. Harpain’s Dairy. The Sunnyside Drive-In. Dean and Don and The Breakfast Club. Gottschalks. The Tower District … and so many more parts of Old Fresno, some still with us and some long forgotten. “Fresno Growing Up: A City Comes of Age 1945-1985” is the first book to tell the story of Fresno during the times we remember, when the city was growing up fast and so were we. “Fresno Growing Up” documents the Fresno experience and Fresno popular culture during its dramatic postwar period, when the city abruptly shifted from a small town to the fastest growing city in the United States. Surveying the businesses, restaurants, movie houses, malls, personalities, sports, bands, and fads that made Fresno fun from the forties to the eighties, “Fresno Growing Up” is a nostalgic look back at both the city’s adolescence and our own.
Published: Aug. 1, 2015
ISBN: 978-1610352505

Before it was a modern freeway, California’s State Highway 99 was “the main street of California,” a simple two-lane road that passed through the downtowns of every city between the Mexican border and the Oregon state line. Highway 99: The History of California’s Main Street turns back the clock to those days when a narrow ribbon of asphalt tied the state’s communities together, with classic roadside attractions and plenty of fun along the way. Highway 99 documents the birth, growth, and transformation of the highway; the gas stations, motels, restaurants, and attractions that flourished and declined by the roadside; and the communities, personalities, and historical events that made their mark on the highway. From the migrations of the Dust Bowl to the birth of the Bakersfield Sound to the foundation of America’s fast-food culture, the history of California has happened around Highway 99, and Highway 99: The History of California’s Main Street brilliantly depicts that history.