Steve Fisher is a retired IT professional who received a degree in electrical engineering from the University of Pennsylvania in 1964. He is also a former diving champion who once held state and national swimming records for his age group.
Wanting to learn more about his late grandfather, archaeologist Dr. Clarence S. Fisher, Steve traveled to Egypt in 2002. Although he traveled to the country as a tourist, he hoped to discover more about his grandfather and the mysteries surrounding his life and death. Learn more about Fisher’s trip, his grandfather, and the exciting facts behind The Carswell Covenant on his website, EightPointFive.net.

“Debut novelist Fisher makes good use of selected details from his family history to underpin this adventure; Steve, Clarence, and Glenn, for example, are based on real people, but the story is fictional. Overall, the setting is exciting and there are a few tense scenes.”
– Kirkus Reviews 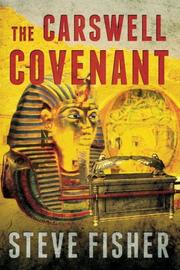 In this debut thriller set in the early 2000s, an IT expert searches for a tomb explored by his Egyptologist grandfather and discovers startling revelations.

Fifty-eight-year-old computer tech Steve Fisher comes across a mention of his archaeologist grandfather, Clarence Stanley Fisher, in an Elizabeth Peters novel and becomes intrigued. Curious, Steve gets in touch with Tina Gilbert, a doctoral candidate in Egyptian archaeology, who fills in some blanks about his grandfather’s history, which only raises further questions. For example, was Clarence a spy, as many archaeologists were during wartime? And does a map that he drew contain clues to the location of King Solomon’s treasure and the Ark of the Covenant? Meanwhile, a new concordance of the Dead Sea scrolls shockingly suggests that the Pharaoh of Exodus gave the Jews “only a one-hundred-year covenant to the Kingdom of Israel,” which a character says could lead to war in the Middle East. Then Steve’s brother, Glenn, brings up another wrinkle: could Moses have been Akhenaten, the Pharaoh who briefly introduced monotheism to Egypt, as Sigmund Freud once suggested? (In real life, this idea has been disproven by archaeological evidence.) Steve, Tina, and Glenn travel to Egypt to learn more, retracing Clarence’s steps; meanwhile, terrorists who have learned of the trio’s goals, follow them. Steve gets to do his best Indiana Jones impression, effecting two brave escapes and making an important find. Debut novelist Fisher makes good use of selected details from his family history to underpin this adventure; Steve, Clarence, and Glenn, for example, are based on real people, but the story is fictional. Overall, the setting is exciting and there are a few tense scenes. However, the story moves too slowly, bogged down by inessential details and repetition. The character of Steve sometimes comes across as stodgy; for example, he refuses to eat Egyptian food, preferring Pizza Hut. Also, just hours after Tina is nearly raped by an Egyptian captor, he enjoys a chance to spoon with her—naturally, their refuge has only one twin bed—and creepily jokes, “And to think, we’re both dead tired and I don’t have any Viagra!”

Some intriguing elements, but this sometimes-off-putting adventure lacks the zip a thriller needs.

The Carswell Covenant, by Steve Fisher