Steve graduated from UCLA with a B.A. degree in Economics and has lived in Seal Beach, California since 1972. After 36 years in national sales and sales management, he retired from Vision Service Plan (VSP) in 2009.

Soon after retirement, Steve began his quest to learn more about the World War II experiences of his father, pilot Howard Snyder, and his crew of the B-17, Susan Ruth. It became his passion, and after 4 ½ years of dedicated research, resulted in book, Shot Down. One result of his new career as a World War II historian is that he is a member of numerous World War II organizations and is President of the 306th Bomb Group Historical Association. Since being released in August 2014, Shot Down has won 15 national book awards:

“A gripping story for readers in search of either drama or historical edification.”
– Kirkus Reviews 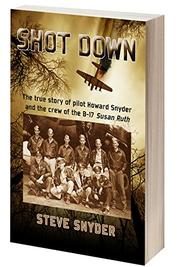 Debut author Snyder became an amateur historian following his retirement, inspired by his father Howard’s participation in World War II as the captain and pilot of a B-17 Flying Fortress bomber. Partly based on Howard Snyder’s diaries, this book also includes interviews with his crewmates, weaving a cohesive quilt of perspectives. The story begins with and centers on Howard’s life, starting with his upbringing in Nebraska, and taking readers on a tour of his marriage to Ruth, his enlistment, his time in pilot school, and then a series of dangerous combat missions over German-occupied Europe. However, the book is just as much about the war itself, and its grand historical moment in time, as it is about Howard’s life. The author discusses the horror and consequences of Pearl Harbor, the devastation and tactical importance of D-day, and the Casablanca Conference, for example; he also describes the lives of the soldiers themselves, such as how popular they were with English women and how they used recreation to distract themselves from the danger at hand: “Regardless, most men were able to keep a relatively detached attitude, centered on self-survival and the common belief that it only happened to someone else.” Even the dramatic culmination of the book, when Howard’s plane is shot down over Belgium, is equally concerned with depicting Belgium as it is Howard’s plight. This is a stark, welcome contrast to the current fashion among literary renderings of war, which prefer to focus solipsistically on characters’ interior lives. More than a third of the book is devoted to Howard’s attempt to evade German forces after being shot down, when he was dependent on the good graces of Belgium resistance forces. The author does an impressive job letting the tale speak for itself, giving center stage to the words of the soldiers and eschewing unnecessary dramatic embellishment. Although it breaks no new historical ground, Snyder’s contribution is an excellent one that honors both the personal and global effects of war.

A gripping story for readers in search of either drama or historical edification.

SHOT DOWN: THE TRUE STORY OF PILOT HOWARD SNYDER AND THE CREW OF THE B-17 SUSAN RUTH: Next Generation Indie Book Awards - Winner Military, 2015

SHOT DOWN: THE TRUE STORY OF PILOT HOWARD SNYDER AND THE CREW OF THE B-17 SUSAN RUTH: 2015 International Book Awards - Winner History: General, 2015