Steven Nicolle has worked in the Food and Beverage Industry for close to 38 years. He started out as a bartender then worked his way up to management learning a second language along the way. Utilizing his knowledge and experience he was able to work internationally both in Switzerland and England in management positions. Then perhaps his greatest experience was working with a cruise ship four years during which he excelled as head of Food and Beverage Operations for the entire ship. On top of that he met his wife who also worked on the ship as well.

One notable achievement was Steven Nicolle teaching bartending for several years similar to how he learned some years before. He has appeared frequently on local cable television shows both promoting the bartending course and to talk about his travel experiences. Steven Nicolle had his own radio show with VoiceAmerica entitled the 'Hospitality Network" when as host he interviewed leaders in the industry learning how they got started and what their passion was about what they do.

Learning French along the way Steven is also a proud recepient of the Sommelier Diploma from the International Sommelier Guild. He also has graduated from the Cordon Bleu Pastry Course.

Steven Nicolle and his travels sometimes found him in difficult situations but he always landed on his feet to pursue his dreams which was to travel and learn more about his chosen career.

“Nicolle does a good job weaving his tangled back-and-forth travels into a coherent narrative and is especially interesting when talking about the nuts and bolts of what bartenders, waiters and maître d’s actually do.”
– Kirkus Reviews 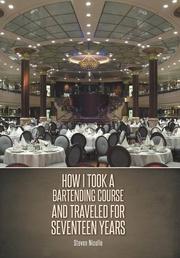 YOU ONLY LIVE ONCE

In this debut memoir, a Canadian man looks back on his 17 globe-spanning years in the hospitality industry, from bartender to maître d’.

In the two years between dropping out of school and taking a bartending course at age 20, Nicolle had held more than 25 jobs, including janitor, truck driver and assembly-line worker at an automotive plant and a wallpaper factory. He’d flunked tests for the police force and the Armed Forces. So why bartending? Nicolle liked to travel and he liked to drink; he hoped to meet girls; and “After all,” he writes, “I figured that I only live once.” This decision led to a life of rootless travel; on leaving Canada, he writes, “It would be ten years before I owned another car. Eight years before I would have my own address again. Ten years before I would own any furniture.” Bouncing from country to country, ski resort to private club to cruise ship, hard-working Nicolle improved his skills along the way, such as learning French and taking a Cordon Bleu pastry course. Not all of his decisions were successful, such as his attempt to join the Canadian Navy (he washed out in basic training). But often Nicolle’s gambles paid off, as with working at an exacting Swiss hotel: “[M]ost of all I learned that when it comes to service there is never any room for excuses.” Nicolle does a good job weaving his tangled back-and-forth travels into a coherent narrative and is especially interesting when talking about the nuts and bolts of what bartenders, waiters and maître d’s actually do. The memoir could use some editing (for example, eliminating unnecessary use of the phrase “you could say”), and Nicolle can be overly offhand; a funny waiter “would have us bent over laughing so hard. Some of his jokes I still remember to this day.” Well? Usually, though, Nicolle’s conversational style works, and he has some good, pithy lines to offer: “In Switzerland, perfection is a requirement.”

A bit unpolished, but a quick-moving account of a nomadic life.

Anything You Can Conceive and Believe You Can Achieve