Steven Paul Winkelstein is the award-winning author of Brisko: A True Tale of Holocaust Survival. His extended body of work includes Captain Kidd and the Jersey Devil; The Wild Mind of the Winkle; Monster Meet on Mondays; The Squall; Elephant, Elephant, Come Alive!; The Diving Horse and the Magic Whistle; and Lucy’s Great Adventure. These publications include picture books and poetry for children, juvenile non-fiction, a juvenile novel, and a short story about pirates. He is currently writing a trilogy of space novelettes for young readers.

Steven lives in beautiful Boulder, Colorado, where he often longs for the ocean and bay surrounding his hometown of Margate City, New Jersey. He graduated from the Art Institute of Philadelphia in 2008 with a BS in Digital Media and Film. His favorite book is The Old Man and the Sea, and he enjoys reading it in one sitting, preferably on a balcony in downtown Los Angeles. Steven is always on the lookout for a human best friend, since his current best friend is a sock puppet.

Steven’s mission in writing Brisko: A True Tale of Holocaust Survival is to help young people understand why it is so important to treat each other with respect and tolerance. He hopes to help stop bullying by educating young readers on the dangers of intolerance and indifference.

“An amazing story of survival and hope that will resonate with audiences of all ages.”
– Kirkus Reviews 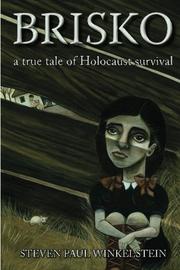 Brisko: A True Tale of Survival

Libe is only 7 years old when the Nazis come to her home in Tuchin, Poland. Her family is Jewish, so their lives are in great danger; in fact, she and her mother are brutally beaten and barely survive. Soon the family loses their possessions and, eventually, their home. Libe and her family are forced to move to the local ghetto, where her sister, Channah, gets separated from them. It’s only thanks to the kindness of Pavlo, a Ukrainian farmer, that they escape the massacre of the town’s Jewish population in 1942. Libe’s father manages to join them at Pavlo’s farm, where they hide themselves away for 18 months. During this period, the family spends time in a haystack, crammed together and with very little food or water. Libe considers Pavlo’s dog, Brisko, to be an unlikely angel; he seems to sense their plight and sounds the alarm whenever danger is nearby. He also serves as a beacon of hope and strength to young Libe in the midst of so much terror and death. Winkelstein fictionalizes the true story of a Holocaust survivor named Laura, using her memories, her father’s videotaped oral history, and his own extensive research into the Holocaust. The author masterfully tells this moving, difficult story, which includes brutal violence, fear, loss, and death, by doing so through the eyes of a child. Along the way, he challenges his young target audience to situate themselves in a very different time and place, concisely defines difficult concepts such as “pogrom” and “Judenrat,” and confronts questions of good and evil. Overall, it’s an honest look at the Holocaust that’s appropriate for young readers without dumbing down real-life history or glossing over the truth. Juliano’s beautiful and often bleak illustrations provide a wonderful accompaniment.

An amazing story of survival and hope that will resonate with audiences of all ages.

The Old Man and the Sea

I can lick my elbow.

Food and the ocean.