Steven Price lives in Boston's Metrowest with his wife and two girls. He graduated from the University of Chicago with a major in Archaeology and received his law degree from The George Washington University. His love for mythology and fantasy began when his parents gave him an illustrated copy of The Odyssey which soon grew ragged from overuse. When not devising new and insidious ways to torture his characters he can be found buying far too many comic books and simply enjoying fatherhood.

“The mix of fantasy, sci-fi, and satirical elements makes for a massive, immersive, and entertaining world that should please genre fans and general readers alike. A big, fun fantasy epic.”
– Kirkus Reviews 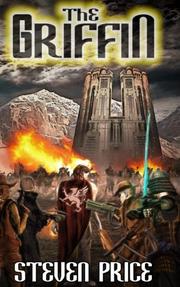 Price’s debut fantasy novel follows a young man who is the latest in a line of Earth-defending heroes.

Avery Cole, a University of Chicago student about to propose to his girlfriend, is looking forward to a night of watching the Cubs and drinking beer when a sword falls from the sky, pierces him through the chest, and zaps him into another world. The sword, it turns out, is Excalibur, the magical weapon of King Arthur. It’s presence in Chicago as part of a museum exhibition has brought all sorts of unlikely characters to the Windy City: Sir Gawain of the Round Table; a dwarf named Nicholas; an ancient madman named Solomon; and Solomon’s sidekick pig, Eustathios. Many wish to claim the sword, but Excalibur has chosen Avery. He awakens in the midst of a white ocean and swims toward an island where he is told, “Give up. Your pain, your past, your life is over. Join us for the Griffin has claimed you.” The Griffin is a figure—sometimes heroic, sometimes villainous—called upon to protect the Earth from outside interference. Assisted by a group of ragtag heroes from across history and myth, Avery lands in the middle of an ancient battle waged between the Tribunal, who are bound to defend our world as we know it, and Empros, Inc., an interdimensional corporation poised for a hostile takeover. Price’s prose moves the reader along at a pleasant trot: “With each step the former Knight of the Round Table took towards the museum a green glow began to hover around him like fog creeping in from Lake Michigan.” The book is suffused with an endearing humor, which makes the characters easy to root for and the mythos easy to stomach. While the dialogue is often rather wooden, Price adeptly handles the novel’s parallel storylines and keeps the reader with him for the whole of the book’s 700-plus pages. The mix of fantasy, sci-fi, and satirical elements makes for a massive, immersive, and entertaining world that should please genre fans and general readers alike.

Creating new people and places and sharing them with my readers.