Steven Schindler was born and raised in the Bronx and has also lived in Washington DC, Chicago, and Los Angeles. Having worked in television for over 25 years as a writer and producer, he has produced TV programs featuring The Who, Anwar Sadat, Michael Jordan, and Vlasta the Polka Queen (among others), winning four Chicago Emmy Awards. HIGH DESERT HIGH is his sixth novel. His previous novel, THE LAST SEWER BALL, was the Grand Prize winner at The New York Book Festival, awarded at the legendary Algonquin Hotel in NYC. Schindler's debut novel, SEWER BALLS, was called "probably the best novel produced by the small presses in 1999" by Small Press Review. His second novel, FROM THE BLOCK, won the Best Fiction award at the DIY/Indie National Book Festival. His third novel, FROM HERE TO REALITY, (Pocket Books) was called "Required reading!" by the New York Post and received praise from Jay Leno, Roger L. Simon (The Big Fix), and Publishers Weekly. His fourth novel ON THE BLUFFS was released in 2009 . HIGH DESERT HIGH, was released in November of 2017. He lives with his wife in Los Angeles and can often be found riding a dirt bike up a rocky trail near Joshua Tree, California.

“A sublimely unusual tale of a man’s dementia or, perhaps, his awakening.”
– Kirkus Reviews 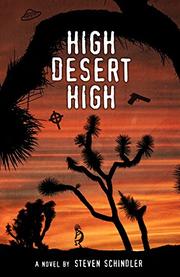 A newly retired NYPD cop moves to the California desert and experiences culture shock—with hippies and UFO sightings that may be driving him crazy—in this mystery.

While he’s off duty, Lt. Paul Santo’s meal is interrupted by protesters demanding restaurant diners stand in objection to racist police. Paul’s clash with one demonstrator gets him in trouble, but rather than take a one-day suspension, he opts for retirement, already fed up with a public that designates cops as the bad guys. He soon has the chance to reconnect with his 21-year-old daughter, Tracy, who’s been estranged since Paul’s alcoholic, drug-abusing wife, Marcy, left him years ago. Tracy wants to start a new life on the West Coast. Paul joins her, and while Tracy stays with her friend Heidi, he seeks adventure at the Joshua Tree National Park. There he meets Kate at the Joshua Tree Inn’s front desk and later encounters a band of hippies who regularly dabble in drugs and UFO gazing. One night, Paul himself spots an unexplained spacecraft on the road, precipitating a vehicular accident. He’s certain someone in the group slipped him a Mickey (like, say, LSD); otherwise, there’s a very good chance he’s losing his mind. Though Schindler’s (The Last Sewer Ball, 2013, etc.) offbeat novel ultimately delves into the mystery of Paul’s mental state, it builds on a sturdy foundation of lonely cop–turned–family man. Paul’s torn between giving Tracy space and ingratiating himself into her life; Tracy wants to tell her father the true nature of her relationship with Heidi and her surprise career plans. It’s a worthy precursor to the latter half, which is effectively blanketed in ambiguity. Even Kate, for example, is suspect (maybe she drugged Paul’s tea), and many things could be the reason he sees the craft and other peculiarities, from stress to the desert heat. The prose, meanwhile, spices up the narrative without subverting Paul’s predicament: “As he coffee’ed up, his brain was spinning, churning, digging for solutions.”

A sublimely unusual tale of a man’s dementia or, perhaps, his awakening.

Steven Schindler On-Location in the Bronx and the high desert

Schindler Pens Tale about Growing up in the Bronx, 2017

FROM HERE TO REALITY

(Published by Simon & Schuster/Pocket Books) They call it the land of fruits and nuts, lala land, tinsel town, but to Johnny, it was just a company town. Somewhere that offered a job in a business he had experience in: television. Having been just laid off, he wanted to make a new start in a new town, but little did he know that the only jobs available were in something new called reality television. And even more of a shock would be the reality that awaited him just a couple of doors over in his new apartment; a reality named Benny.
Published: June 1, 2005
ISBN: 978-1416500469

(Best Fiction winner, Indie/DIY Book Festival) From the wild Irish pubs of the Bronx, to the bizarre world of the underground video art scene in SoHo, to the sleazy battle-zone known as television news, From The Block captures the hearts, minds and souls of best friends and worst enemies as they each pursue their own visions of heaven and hell.
Published: Sept. 1, 2001
ISBN: 0966240871

While Brian DeLouise was working the graveyard shift at a conspiracy theory-crazed radio station his wife was alley-catting around Washington DC. But a cheating spouse and a dead-end job no longer made him angry or depressed. He was just numb. It took a daring brush with death to awaken his senses and a few clicks on Google to begin a journey to recapture a love he believed was gone forever. Brian finds his lost lover in a rundown mansion on the windswept cliffs of Cape Cod, where he must confront a fast approaching evil while he risks destroying his own life and that of everything he now cherishes.
Published: June 1, 2009
ISBN: 0966240812

Set against the backdrop of the Bronx in the 1960s; For best friends Whitey and Vinny, every day was an adventure into a new, forbidden world of hidden kisses, stolen beer, and songs sung by guys with Moe Howard bangs that made the girls get weird. Little did they know that each of those adventures would take them a little bit deeper into a fast, unpredictable world where fun can turn into tragedy in a New York minute.
Published: Jan. 1, 1999
ISBN: 0966240863

(Grand Prize winner at The New York Book Festival)After a Bronx grade school reunion, middle-aged NY transplant living in LA, Vinny decides to track down his childhood best friend, Whitey, who is rumored to be dead, dying, in jail, or on the run. Through a series of flashbacks, this coming-of-age as kids story , parallels the coming-of-age as adults, when a quest to find a long lost friend opens doors that maybe should be left closed. A "sort of" sequel to "Sewer Balls"
Published: June 1, 2013
ISBN: 0966240898