My father, John Box, was a film production designer, working on ‘Lawrence of Arabia’, ‘Dr. Zhivago’, ‘The Great Gatsby’, ‘A Man For All Seasons’ and the musical ‘Oliver’. Our house was always filled with people, usually eccentric, always talented, invariably stroppy, discussing stories. My mother put my father’s four Oscars to good use as toilet roll holders, doorstops and hat stands.

A major chunk of my childhood was spent loitering around on film sets. Who needs an ‘English education’ when you have the marble-dusted streets of downtown Moscow, ten miles outside of Madrid, to explore?

But then the years of ‘Who Will Buy My Sweet Red Roses’ came to a rather abrupt end. Reality knocked on the door in the guise of the Metropolitan Line to Shepherds Bush and the BBC. Working in television as a drama script editor and story consultant, I was part of the creative team responsible for setting up the hit drama series ‘Casualty’ - still going strong today. I became known for going after the more ‘difficult’ stories at the same time successfully racking up viewing figures from 7 to 14 million.

I went on to develop various projects for both the BBC and the independent sector. The period I enjoyed most was working with Jack Rosenthal, a wonderful writer, on the series ‘Moving Story’ – ‘That’s a situation, a good situation, but now you need to make it into a story.’

Martin, my husband, was made an offer he couldn’t refuse and we left England to live in Amsterdam. ‘Ik wil een kilo kabeljauw, alstublieft’ will, if all goes well, buy you a piece of cod – I decided to concentrate on my writing rather than my Dutch pronunciation.

My debut novel, ‘We’ve Come to Take You Home’, set in the present and in 1918, a crossover aimed at the adult and young adult women’s popular fiction market, was published in the Spring of 2016.

“A stirring reminder of the horrors of war and a distinctive take on the timelessness of love.”
– Kirkus Reviews 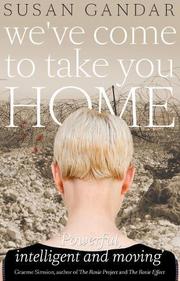 WE'VE COME TO TAKE YOU HOME

Two teenage girls from different centuries become strangely connected through personal tragedy and the events of World War I in this debut novel.

Sam Foster is a British teenager with a long-lived set of imaginary friends. At the age of 2, Sam appeared on top of a tall stool, waving at the lightning outside the window. Spooked that these people her child saw might really be the undead, Sam’s mother ordered her husband to move the family to a new house, one in which no one had yet died. At 15, Sam still sees people and visits places that others do not. Her airline pilot father is involved in a devastating car crash, and Sam now sits at his hospital bedside while wrestling with the meaning of the visions she experiences. A second narrative, set during World War I, focuses on Jessica Brown, 15, whose father has been killed in the war. After her younger brother dies of starvation, her penniless mother sends Jessica to work as a maid in London. There, in the opulent home of Maj. Osborne, Jessica works only for room and board, and this unpaid position becomes so demanding, it leaves her hands bleeding. The major’s two oldest sons have died in the war, but the youngest one, Tom, is home on leave. Jessica and Tom are drawn to each other, and it seems as if this unlikely coupling may be a permanent one. Just as Tom prepares to head back to France, facing slim chances of survival, Sam, in the present day, engineers a desperate, supernatural attempt to save her father’s life. Gandar’s work certainly gets off to an intriguing, though slightly confusing, start. Some of Sam’s early visions and travels can be a bit mystifying. Jessica’s wartime story, though, is a convincing, heartbreaking tale that becomes almost compulsively readable after she moves to London. Details about England’s food shortages, the maid’s household responsibilities, and the whims of the wealthy while the poor suffer add potency to an already engrossing account. As Sam’s story collides with the past, the novel slowly becomes whole, leading to an eloquent and moving ending.

A stirring reminder of the horrors of war and a distinctive take on the timelessness of love.