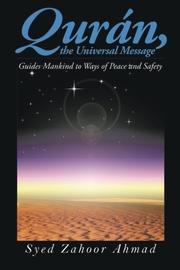 An examination of different aspects of the central Islamic holy text.

The Quran, Ahmad (Aspects of the Quran, 2009) explains, is meant to serve as “an eternal book of guidance for all of mankind.” As he explores this guidance in detail, he supports his interpretations with a plethora of quotations from its text. For example, he notes that the Quran highlights the importance of caring for the poor (“Islam detests poverty”) and the necessity of protecting the environment (“Those who corrupt the land are thieves”). What does the holy book have to say about the just nature of God? One example that Ahmad offers includes this Quranic quote: “And none shall be dealt with unjustly on the Day of Judgement.” The interpretations are mostly the author’s own, but he occasionally references the opinions of other authors, such as those of neuroscientist Sam Harris, whose anti-Islamic sentiments, Ahmad says, misconstrue the peaceful nature of the religion. The author also criticizes Muslim scholars for what he characterizes as misinterpretations or overemphasis on particular aspects of Islam. He notes, for example, that both Muslims and non-Muslims appear to be obsessed with the ways in which women are permitted to dress, according to the Muslim holy book. Ahmad points out that, out of more than 6,200 verses in the Quran, “only three regulate women’s dress.” So, he wonders: Why do so many people make such a big deal out of it? This book will best serve readers who are largely unfamiliar with the Quran. It reveals the thoughts of a lay Muslim who proffers no agenda in his work other than to explain the central text of his religion in a way that anyone can understand. This relatively brief work isn’t an exhaustive dive into Islamic thinking but a digestible primer on its most important text. It provides extensive examples in an attempt to neutralize hostility leveled at Islam, and, as a result, readers will come away with an understanding of the faith that goes beyond news headlines and the rehearsed opinions of professional spokespeople. But although the book does offer a heartfelt defense, it might have proven even more effective if it had taken a more deeply personal tone. The author does share one anecdote from his childhood—regarding his youthful indifference to the lives of some small frogs and the resulting lesson that he learned from his mother—but readers may find themselves largely at a loss as to how Ahmad and those close to him made use of the Quran’s teachings in their own lives. He does clearly lay out his interpretation of the holy book’s “universal message,” but he could have better shown the impact of its teachings on individuals. An extensive foreword provides some insight into his reasons for writing the book—pointing out, for instance, that the market was “flooded with anti-Islamic literature” following the 9/11 attacks—but more personal context might have resulted in a truly nuanced reading experience.

An earnest, if occasionally dry, introduction to the Quran.