Sylvia Abolis Mennear, born in Vancouver British Columbia Canada. Married with 3 boys, moved to the Okanagan Interior of British Columbia at the age of 30 so their family of 5 could have a more relaxed way of life. Worked for the University of British Columbia Okanagan while she and her husband developed a campground in Vernon. After several years of both working long hours at their jobs and their campground they decided to sell the campground and move on to Cherryville BC, where her husband Jim built them their dream home. 1500 Century replica of a Brazilian Castle on the Shushwap river which inspired her childhood dreams and led her on the path to write "Enchanted Castle on the River".

"I never thought I would have the stamina or patience to write a book, I was surprised at how my imagination kept on flowing, so much that I am working on the next book of Enchanted Castle on the River."

"Most people realize what they want to do in life at a young age. It just took me a bit longer" 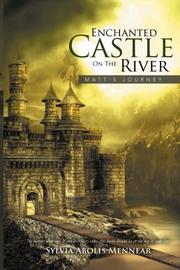 ENCHANTED CASTLE ON THE RIVER

A summer camping trip takes an unexpected turn when a 14-year-old boy stumbles into a world of magic, witches, and an ancient curse in this fantasy adventure debut.

Matt’s family is used to his imagination getting him into trouble, but not even he could have dreamed up the dangers he would soon face. After convincing his parents to let him explore the campsite without his irritating, tag-along little brother, Ben, Matt finds himself following a strange doglike creature that stole his mother’s watch. A mysterious castle, a wish, a plane ride, and a short Olde English lesson later, the teenager finds himself transported to medieval Britain in the company of a group of friends who seem to recognize him as “Sir Matthew.” But this new identity comes with nightmarish news. Sir Matthew’s father, King Vincent, is on his deathbed with polio, and his younger brother, Isaiah, “is out to behead thee so that he will be next in line for the throne.” Matt must rely on these new friends to help him escape sinister Isaiah and return to the dying king’s bedside, only to be charged with a quest to face an evil magical being and break a generations-old curse. Subtract some expletives and the Olde English accents and Mennear’s story has the potential to turn into an enjoyable, plot-driven children’s fairy tale. The action doesn’t stop, even for characters who often fail to respond believably to life-threatening situations, as when Sir Matthew’s best friend, Jacob, takes a break from helping his pal run for his life to flirt with pretty maiden Tiffany. She promptly falls in love and agrees to accompany the duo on the dangerous journey. While Matt is not a particularly endearing character, he is a fully developed hero who grows by the story’s end by demonstrating some selfless courage. During his travails, he matures and feels more appreciation for his family and his little brother in particular. Still, the tale lacks the rich worldbuilding and narrative thrills that would make it compelling for a wide audience.

We hear about the opioid crisis in North America and might picture a victim in our mind as a street person, the proverbial man in ill-fitting clothing living under a bridge. In reality, this epidemic is killing our previously healthy, happy, even athletic youth in staggering numbers. Shattered Dreams and Broken Hearts brings us back to reality: each one of these death-by-overdose statistics represents a human being, and in this case, someone who is loved very much. Written by the mother of the late Aaron Mennear, a bright young man with his whole life ahead of him before opioids took him too soon, this book is as much informational as it is emotional. There are statistics on opioid deaths covering both Canada and the United States, as well as the heartbreaking details of Aaron’s downward spiral as a result of getting addicted first to prescription painkillers. There is also a chapter penned by Aaron’s girlfriend describing his attempt to get off drugs outside of a medical facility, and the difficulty of the withdrawal symptoms. Since someone who hasn’t endured this most unfathomable loss could ever fully comprehend the pain and other turmoil of emotions, mention is made of an organization called The Compassionate Friends, which, according to their website, exists to provide friendship, understanding, and hope to those going through the natural grieving process. Another group mentioned is Moms Stop The Harm (MSTH), “a network of Canadian families whose loved ones have died due to substance use or who hope for recovery. We call for an end to the failed war on drugs, which is a war on the people we love. We envision a new approach based on reducing harm, where people who use drugs are treated with respect, compassion and support” (www.momsstoptheharm.com). This book will surely be as helpful to a reader going through this unimaginable experience as it was therapeutic to the author. Shattered Dreams and Broken Hearts is a completed, 25,020-word non-fiction book geared toward Young Adult and Adult readers. It has been professionally edited. In addition to Shattered Dreams, I’ve written some poems to my late son, Aaron, and have included them in the book. Also I have written a fictional book called Enchanted Castle on the River 'Matt's Journey' with the 2nd book in the works.