Thomas Barlow is an iconoclast who thinks deeply about the scientific method. Formerly a Fellow of Balliol College, Oxford, and a columnist with the Financial Times in London, he now advises universities and technology companies in Asia, Australia, and the US on research investment.

He has written two non-fiction books about innovation: The Australian Miracle (2006) and Between the Eagle and the Dragon (2012). In December 2016, his satirical novel of ideas, A Theory of Nothing, was awarded the Kirkus Star.

“This is a rare book - hilarious, thoughtful, and culturally relevant all at once.”
– Kirkus Reviews 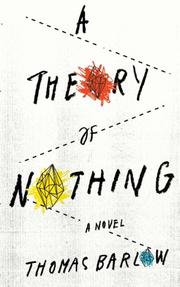 A Theory of Nothing

Barlow’s (Between the Eagle or the Dragon, 2013, etc.) debut novel provides a farcical look at the pursuit of junk science in the hallowed halls of the academy.

Sandra Hidecock, a distinguished legal professor at Harvard, plunges to her death from a campus window. Her demise is ruled a suicide and followed by a celebration of the central theme of her work: the tyranny constituted by the immutable laws of nature, the chief barrier to the achievement of human autonomy. Harvard scientist Duronimus Karlof generally considers her work to be faddish nonsense based on a puerile misunderstanding of even the most basic science. But Hidecock left him a letter imploring him to consider her research, a solicitation he finds surprisingly moving. As a result, Karlof decides to put together a team of underachieving academics—he calls them “gloominaries”—to pursue an ambitious project inspired by Hidecock, the contravention of the laws of nature. After the consideration of utterly outrageous possibilities, the “Harvard Six” decide to create a machine—the “Ooala Reactor”—which can slow an object down even after it becomes stationary, achieving a condition they call “sub-stationary.” Of course, this is scientifically meaningless, but apparently that’s an unimportant concern. When one of the scientists expresses anxiety over the coherence of the project, Amelia, the group’s legal adviser and a devotee of Hidecock, responds: “You mustn’t worry about that. If people understood modern physics, nobody would ever fund it. Our greatest advantage will be that nobody understands what we’re doing—not even us.” They manage to raise over a billion dollars in funding commitments and attract the enthusiastic attention of academic and governmental organizations alike. A gifted satirist, Barlow impressively lampoons higher education’s obsession with novelty at the expense of rigor and common sense. The dialogue is memorably funny, and the author avoids the most common trap of satire, which is to adopt a sententiously knowing tone. The story intelligently raises provocative questions about the historically stormy relationship between science and public opinion, and it wryly exposes the vanity and ideological blindness of even the most heralded intellectuals. This is a rare book—hilarious, thoughtful, and culturally relevant all at once.

A cheekily ironic takedown of academic adventures in absurdity.

A Theory of Nothing: Kirkus Star

Between the Eagle and the Dragon